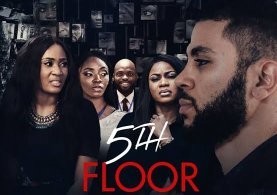 A ROK Studio production that showcases a young lady who takes charge of her father’s business in the 5th floor of his multimillionaire firm without a clear understanding of office politics and its implications. Dim Oba, takes us through its review this week.

Plot
Ruby is a daughter of a rich dad who had just handed her the position of a director of the 5th Floor. She comes in with so much confidence and pride to pilot its affairs with strong hand without recourse whose horse is gored. From the disdainful look at Stephen at the car, cold-shoulder given to Nkem while waiting for the lift and her matching orders to her secretary, to wear high heels with a sprain ankle shows the kind of undesirable.

One thing leads to another, she calls for a staff meeting in less than 5 minutes, she fired the company’s accountant of 20 years and not allowing anybody to talk. Ruby lost it at that point as her father is declared wanted for embezzlement of company’s funds and she demoted to the first floor to work with some intents.

5th Floor is a story created and written by Ivie Okujaye under the creative directorial watch eyes of Sobe Charles Umeh. Emem Isong of the famous Royal Film Academy is the producer.

Review
The 5th Floor is for general viewing which takes into cognizance the importance of rebuilding the moral fabrics of society. Indeed, the film media is critical to the upliftment of moral behavior among youths especially as it relates to class differentiation and financial status. Children from rich family should treat their peers with lesser financial standing as trash but subordinates.

Good interpretation of characters and roles. Majority of the cast are upcoming actors and actresses who gave a good account of themselves. The acting came naturally for them as everyday people especially for Ivie Okujaye who played the role of Nkem. To us, Nkem as her name suggest is from Eastern part of Nigerian and her love for bitter leaf soup for breakfast is not surprising, one will think that she supposedly preserved the role for herself as the ‘comic relief’ in the satire of family business.

Nkem is an intelligent character but full of childishness. Her first contact with Ruby, the new director of 5th Floor can be described as primitive and unwelcoming in such an high profile company. Imagine talking to your boss for the first time and you have something stuck to your teeth? The primitive nature of Nkem is dotted from the beginning to the end without a show of personal development unlike Ruby, who was bent to face the other side of live when she fell out with the company’s accountant.

Ruby’s role is well interpreted as the centrifugal character where the actions of the movie rises and falls upon her. Typically, a no nonesense character that lacks respect for people’s feelings and caused them pain as a result of her father’s wealth. These unruly attitudes caused her father his company when some disgruntled elements conspired to sweep the carpet of his feet but the lessons she had learnt helped to bring him back.

Every aspect of the production is on the average. The costume of Ruby did not full complement the character just as Nkem’s costume that was consistent with the role. The production crew left us to our imagination to Ruby’s in true character of meanness and lack of respect. The musical composition didn’t give out any clue of what kind of movie 5th Floor is.

Verdict
Indeed, the Nigerian movie is moving from its village setting to tell stories of office politics, succession and partnership. The 5th floor is one of such stories that is thought provoking and leaves the younger generation much to learn from devoid of intensed romantic scenes. For the fact that the production raises issues of pride, respect and tolerance is a plus for me.

Commendable feat by the production outfit to tell us the repercussions of unruly attitude towards people we perceived to be beneath us at a given time is thus a good film to look out for this weekend. Please, let the family see the movie and parents should educate the children on the benefits of good morals.