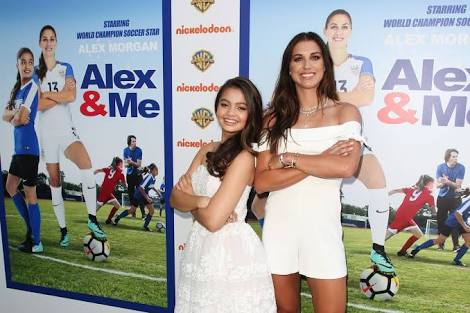 Alex & Me… The Power of Hallucination in the Path of Success

In this 2018 Warner Bros. Entertainment Inc production, Eric Champnella reveals the better part of hallucination as more of mentoring platform than a mental health issue. Dim Oba takes us through another captivating movie review this week.

Plot
Reagan Wills (Siena Agudong) is obsessed with her poster of Alex Morgan (Alex Morgan) wearing the number 13 jassey of the national women’s football team. As she prepares for the trials in a community team, she asks her poster for tips and guidance; arriving late for the trials, Reagan is not qualified to make the team and told sometimes dreams don’t come true.

Reagan’s frustration leads her to destroy the pictures of her role model in her room, in an attempt to bring down the large picture-size frame, she falls to the ground and hits her head on the ground. Alex Morgan reaches out to her and Reagan is revived but seeing her poster becoming real and standing by her. Reagan calls out to mum, the mum rushes in to see her daughter hallucinating but never saw Alex in the room. From then on, Alex appears to Reagan and helps her to reach her gooals.

Review
The act of hallucinations is strange especially against the background of its occurrence. According to dictionary definitions, it occurs as a mental health issue or the effect of drug abuse. While there are no pyscological proof of positive effect, Eric Champnella brings to life an hallucinating character in the quest of reaching her goal of playing professional soccer.

Quite intriguing and suspense based, the movies gives out ways people learn and find help in times of distress. One will never image that one of such ways is hallucinating. It bears a simple storyline but interesting to see how Reagan Wills strive through the rough paths to get reach her dreams.

The details given to the production is near perfect, Alex Morgan costume is found to be example but currently maintained. Her costumes matched a character each time she appears in her chat with Reagan Wills. One can imagine a football jassey always that is well maintained to fit the character.

The character interpretation is unique. The actors were real in the various characters especially Alex Morgan. Maybe or maybe not, Alex Morgan is not a professional actor but gives her true personality to the character ‘Alex Morgan’. The character is blessed with humility, compassion and serving humanity. No many in her class of professional footballers will openly commend a player outside the pitch.

Key Film Credit
The film featured Siena Agudong as Reagan Wills while Alex Morgan played the role of Alex Morgan in film as well as the co-produced. The film was written and directed by Eric Champnella.

Verdict
The film comes with a concept that will serve as a moral booster for young persons. Despite the earlier setback of Reagan to frustrate her dreams of playing soccer with a club as a teenager, she persistently followed her aspirations. The movie scored a good point to challenge young persons not to give up but find whatever means possible to achieve their goals and dreams.

Sometimes, you can learn ways of doing things better through hallucinating; to get a better understanding than look out for the movie this weekend.