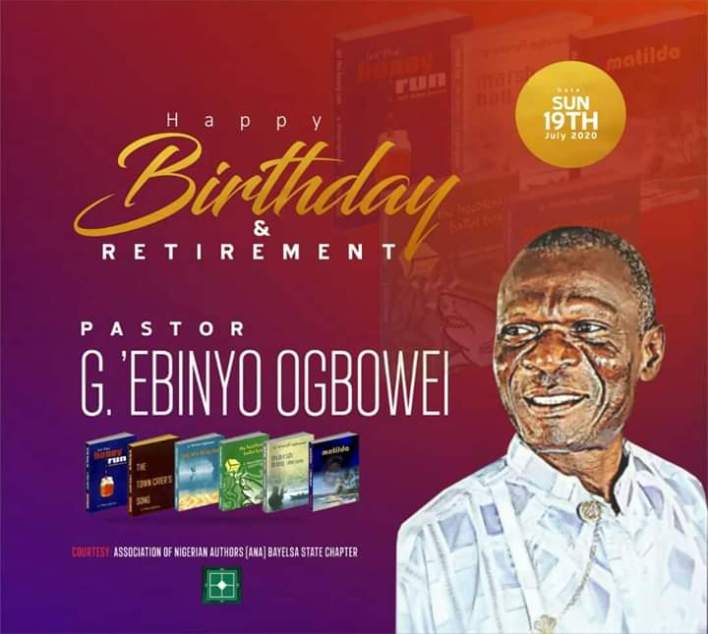 All is now set for the Bayelsa State Chapter of the Association of Nigerian Authors, ANA, to roll out the drums to mark the Sixty-Fifth birthday anniversary of a two-term former State Chairman of the association, Pastor Gilbert ’Ebinyo Ogbowei as he formally retires from the civil service as a Lecturer in the Department of English and Literary Studies in the Bayelsa State-Owned Niger Delta University.

A statement by the Chairman of ANA Bayelsa, Dr, Akpoebi Adesi, the Planning Committee Chairman, Comrade Amatare Mozimo and Secretary, Mr. Ebipreye Egbenpere, describes the multiple-award winning veteran poet, Pastor Ogbowei, as an erudite literary enthusiast with decades of experience in lecturing and mentorship of numerous proteges who have benefitted immensely from his tutelage.

Pastor Ogbowei who was the Head of English and Literary Studies Department in NDU, is billed to bow out of public service having attained the statutory age of sixty-five on Sunday July 19th, 2020 with over three decades experience as a former lecturer in the College of Education, Port Harcourt, now Ignatius Ajuru University of Education, before transferring his service to the Niger Delta University as a pioneer staff.

Pastor Ogbowei is a devote Christian and Senior Pastor at the All Saints Christ Church in Yenagoa.

He is also a prolific editor and media mogul as a one-time Consultant Editor of the regional newspaper, The Beacon, based in Port Harcourt as well as The Golden Pen Newspaper in Yenagoa.

He is the author of six poetry collections including his widely acclaimed curtain raiser: Let The Honey Run and Other Poems (2001), Song of a Dying River (2009) and Marsh Boy and other Poems (2013) which got honourable mention on the long list of the NLNG Prize for Literature (Poetry) in 2005, 2009 and 2013.

His swan song, Maltida was published in 2014 as well as The Town Crier’s Song.