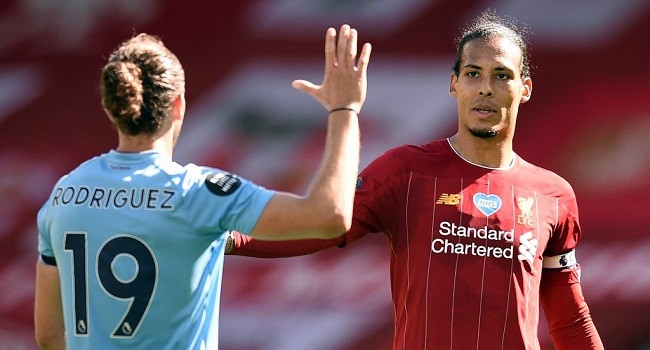 Liverpool failed to win a Premier League game at Anfield for the first time since January 2019 as Burnley ended a run of 24 straight victories for Jurgen Klopp’s men on home soil thanks to Jay Rodriguez’s strike in a 1-1 draw on Saturday.

Andy Robertson’s first-half header had the champions on course to maintain their perfect home record and close in on a record points tally for the English top flight.

But Liverpool were made to pay for a host of missed chances when Rodriguez’s fine finish earned a point to further Burnley’s late push for a place in Europe next season.

It could even have been three for the visitors as Johann Berg Gudmundsson hit the bar late on.

Liverpool can still break Manchester City’s record points haul of 100 two seasons ago, but will now need to win all three of their remaining matches.

Klopp has insisted he is not looking to rewrite the record books, but there was no sign of the German easing up with a first title in 30 years long since won.

Robertson and Sadio Mane were recalled from the side that won 3-1 at Brighton on Wednesday with only injured captain Jordan Henderson and Trent Alexander-Arnold missing from Klopp’s strongest XI.

Salah’s double in midweek kept him in the running for a third Golden Boot in as many seasons at Liverpool and only Nick Pope in the Burnley goal prevented the Egyptian closing in on Jamie Vardy at the top of the scoring charts.

Pope turned a fiercely struck Salah volley over before spreading himself well to deny Liverpool’s top scorer in another one-on-one.

The opening goal came from a much more unlikely source as Fabinho picked out Robertson’s run and the Scotland captain looped a header into the far corner for his first goal since November.

Pope and Liverpool’s Alisson Becker are battling for the Golden Glove and the England international showed why he is in the lead with 14 shutouts as he kept his side in the game once more before half-time to turn Mane’s powerful shot over the bar.

Chances continued to come and go for the hosts after the break. Remarkably despite Liverpool’s home form, their number nine is still yet to score at Anfield in the league this season as Roberto Firmino hit the post to extend his wait for a home goal.

Curtis Jones was given a chance to shine in Henderson’s absence and blasted another big opportunity wide before he and fellow teenager Neco Williams were replaced by the more experienced Naby Keita and Alexander-Arnold.

Yet, as soon as they were introduced, Burnley levelled against the run of play when Rodriguez’s brilliant finish from James Tarkowski’s knock-down beat Alisson from the edge of the area.

Burnley then had the best chance to win the game in the final stages as Alisson flapped at another set-piece and the ball fell for substitute Gudmundsson, who could not keep his shot underneath the crossbar.

However, a prized point moves Sean Dyche’s men up to ninth, with eighth possibly good enough for a place in the Europa League should Manchester City’s two-season ban from European competition be upheld.