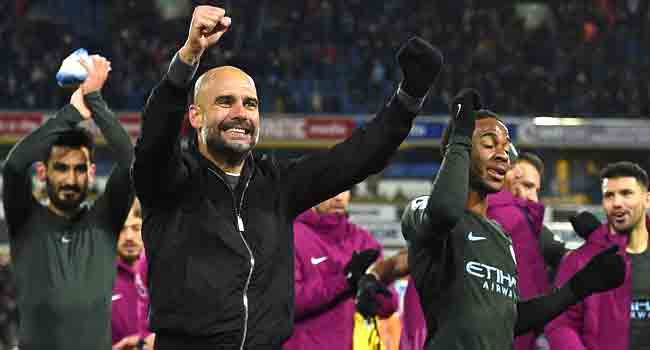 Manchester City are free to play Champions League football next season after the Court of Arbitration for Sport on Monday lifted a two-season ban from European competitions imposed by UEFA.

City were accused of deliberately inflating the value of income from sponsors with links to the Abu Dhabi United Group, also owned by City owner Sheikh Mansour, to avoid falling foul of financial fair play (FFP) regulations between 2012 and 2016.

UEFA launched an investigation after German magazine Der Spiegel published a series of leaked emails in 2018.

However, CAS found that “most of the alleged breaches reported by the Adjudicatory Chamber of the CFCB (UEFA Club Financial Control Body) were either not established or time-barred”.

UEFA recognised in a statement that many of the allegations fell outside the five-year time limit in its own regulations.

“UEFA notes that the CAS panel found that there was insufficient conclusive evidence to uphold all of the CFCB’s conclusions in this specific case and that many of the alleged breaches were time-barred due to the five-year time period foreseen in the UEFA regulations,” European football’s governing body said in a statement.

‘Validation’
City welcomed the decision, which will have huge ramifications for the club’s finances and potentially the future of manager Pep Guardiola and star players such as Kevin De Bruyne and Raheem Sterling.

“Whilst Manchester City and its legal advisors are yet to review the full ruling by the Court of Arbitration for Sport (CAS), the club welcomes the implications of today’s ruling as a validation of the club’s position and the body of evidence that it was able to present,” City said in a statement.

“The club wishes to thank the panel members for their diligence and the due process that they administered.”

Since Sheikh Mansour’s takeover 12 years ago, City’s fortunes have been transformed from perennially living in the shadow of local rivals Manchester United to winning four Premier League titles in the past eight years among 11 major trophies.

More silverware could come before the end of the season as Guardiola’s side face Arsenal in the FA Cup semi-finals on Saturday before restarting their Champions League campaign in August, holding a 2-1 lead over Real Madrid from the first leg of their last-16 tie.

On Saturday, they secured qualification for the Champions League for a 10th consecutive season with a 5-0 win at Brighton.

“We deserve to be there because we won it on the pitch,” said Guardiola ahead of Monday’s ruling.

City’s victory in court will raise fresh questions over how effectively UEFA can police FFP.

FFP, which limits clubs to not losing more than 30 million euros over a three-year period, with exceptions for some costs such as youth development and women’s teams, has helped drive down debt levels in European football.

The ruling also has ramifications for the end to the Premier League season.

With just six points separating third from seventh, many sides were hoping for City’s ban to be upheld, which would have meant fifth place was good enough to qualify for the Champions League.

Instead, Chelsea, Leicester, Manchester United, Wolves and Sheffield United are now vying for two places in the top four. – AFP