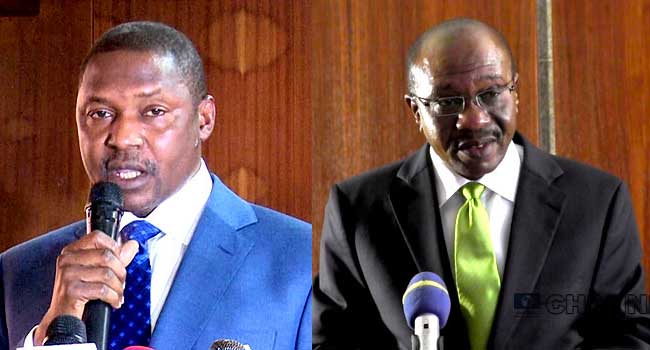 A Federal High Court sitting in Lagos has directed the Attorney-General of the Federation and Minister of Justice, Abubakar Malami, Governor of the Central Bank of Nigeria, Godwin Emefiele, and five others to appear before it on Friday, July 24.

According to the court, they are to explain the alleged handover of the National Theatre to some developers while the structure is a subject of a pending lawsuit.

Among the five others summoned by Justice Ayokunle Faji is Access Bank of Nigeria Plc and its Managing Director, Mr. Herbert Wigwe.

Others summoned to appear before the court are the Minister, Federal Ministry of Tourism, Culture, and National Orientation, the Infrastructure Concession Regulatory Commission (ICRC), the National Theatre and the National Troupe of Nigeria Board.

Justice Faji summoned all the parties who are listed as defendant/respondents in a suit before it by a company, Topwideapeas Limited.

Topwideapeas Limited is reportedly designated as the concessionaire of the fallow land adjoining the National Theatre.

Through its lawyer, Chijioke Okoli (SAN), the company brought an exparte application before the court asking it to reverse the handover in order to protect its interest in the property.

The senior lawyer contended that if not reversed, the handover of the structure would render the eventual decision of the court in the suit null and void.

Okoli also complained that despite pending litigation on the structure, the National Theatre was handed over to the CBN, Access Bank of Nigeria Plc, and Herbert Wigwe on July 12.

The handover was said to have been purportedly done by the National Theatre and the National Troupe of Nigeria Board, the Infrastructure Concession Regulatory Commission (ICRC), and the Minister, Federal Ministry of Tourism, Culture & National Orientation who are listed as the 1st to 3rd defendant in the suit.

Okoli, therefore, is seeking an order “suspending or staying the purported handover on or about July 12, 2020, by the 1st and 3rd defendant/respondents to the 5th-7th defendant/respondents of the National Theatre Complex, Iganmu, Lagos and the adjoining lands, pending the hearing and determination of the applicant’s motion for an interlocutory injunction (by notice filed on December 31, 2019).”