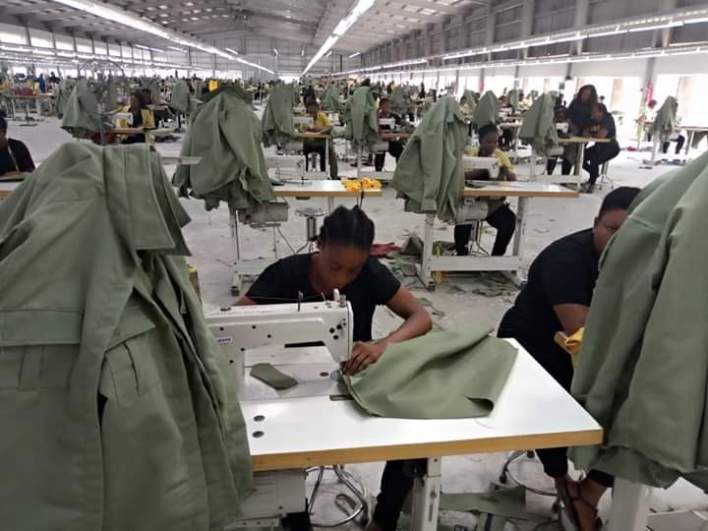 Cross River State Commissioner for industries Hon Peter Egba has revealed that the Cross River State garment factory have a contract in place for the production of Uniforms for members of the National Youth Service Corp (NYSC).

Egba who made the disclosure in Calabar Stated that the NYSC has made an initial order of 8000 uniforms from Cross River Garment factory to be delivered in eight days.

According to Egba , ” The NYSC have brought their materials to us to make for them at the garment factory. Basically the idea behind this is that they want to test our capabilities to deliver within a short period of time that is why they have given us only eight days to deliver eight thousand uniforms”

Continuing the commissioner said ” Because of staff strength and the sophisticated machines put in place by His Excellency Sir Ben Ayade, as I speak to you now we’ve been working for five days and six thousand of the needed eight thousand uniforms are ready, while the other two thousand should be ready within the remaining three days. ”

The Commissioner also revealed that plans are in place for the Cross River Garment factory to handle a larger order of Uniforms from the NYSC in May during the next stream of corp members coming in.

The Commissioner further disclosed that plans are in top gear to follow up with the visit of the chief of air staff to the garment factory last year seeking collaborations with the Cross River State garment factory.

“Beyond the NYSC, don’t forget that late last year the chief of air staff Air Marshall Sadiq Abubakar came here to inspect our facilities at the garment factory with the idea of collaborating with us to see how we can be making uniforms for the officers and men of the Nigerian Airforce. ”

” Following that visit, we are expecting a team next week from their logistics department and also from the Nigerian Airforce investment limited who will be coming to engage with us further to see how they can place some orders from the garment factory. ”

Also Speaking, Senior Special Assistant on garment factory Eunice Egodo assured that the order of Uniforms from the NYSC will be completed and on time, adding that the Cross River Garment factory is fully equipped to deal with large orders of any kind as the Governor has put in place world class machines in the factory.

” The NYSC gave us an order of 8000 uniforms for their corpers to be delivered in 8days, I can assure you that we will make this delivery in earlier than the stipulated time given to us because we have the best equipments and our staff are committed to doing the job. “