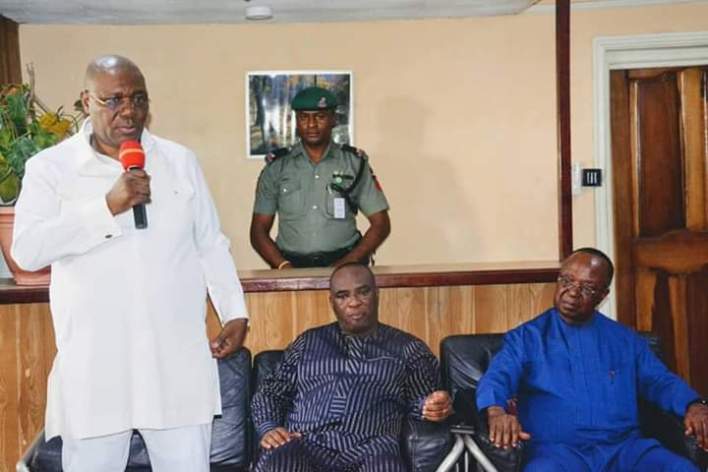 The governor of Delta State, Senator (Dr.) Ifeanyi Okowa and the good people of the State have condoled the family of late Chief Emmanuel Ebimami of Egbema kingdom in Warri North Local Government Area, over the death of their Patriarch.

The governor who was represented by his Deputy, Deacon (Barr.) Kingsley Burutu Otuaro at the late Chief Ebimami’s house along Sedeco Road, Enereh, Warri, expressed his deepest condolence to the entire Ebimami family whom he described as a role model while on earth.

The Governor said Chief Ebimami the Bolowei of Egbema kingdom, who depart this earth at the age of 80 has left legacies and vacuum behind which will be difficult to fill, especially his role as a National figure and his dogged quest at the Advancement Of the Ijaws interest.

Okowa added, “as a government, we deemed it necessary to come and express our condolence to this family and Egbema people considering the role he played in the promotion of peace in this state and Nigeria in Particular”.

The governor remarked further that “Chief Ebimami is a father and a father indeed to many of us. He is a mentor and a teacher who has groomed many of us to what we are today. He built us into the ladder of leadership”.

The governor assured the family that the government of Delta State will support the family to ensure the departed patriarch is given a befitting burial having made the state very proud with his outstanding legacies.

Okowa said to the people, “we owe him the duty to uphold those legacies he left behind. This is what we can do for him since we can not bring him back again. His death affected us all not just his immediate family”.

Chief Matthew Tiemor who represented the Ebimami’s family at the occasion, commended Delta state government and all Deltans for remembering them in their moment of grief just as he prayed to God to guide and protect the Governor and his Deputy, Deacon (Barr.) Kingsley Burutu Otuaro to move the state forward to greater heights.

He assured the governor that every of the plan and date of the burial will be communicated to him including all Deltans.