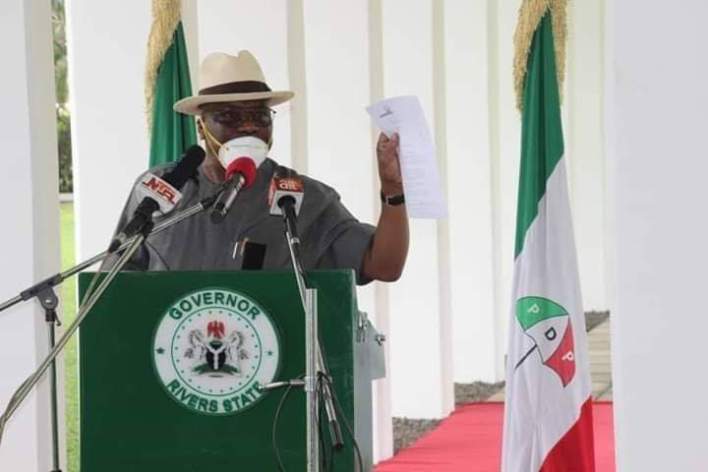 Rivers State Governor, Nyesom Ezenwo Wike has announced that security agencies have arrested 22 staff of Exxon Mobil who entered the State from Akwa Ibom in violation of the State Executive Order.

Governor Wike also announced that Carveton Helicopters have apologised to the State Government over the conduct that led to the arrest of their pilots and passengers who violated the restriction orders of the state.

Addressing a Press Conference in Port Harcourt on Friday, Governor Wike stated that the Exxon Mobil matter will be a test case in legal jurisprudence in the country.

He said: “Security agencies arrested 22 staff of Exxon Mobil who came into the state from neighbouring Akwa Ibom State in violation of the extant Executive Order restricting movement into the state. We do not know the coronavirus status of these individuals.

“Even though security agencies advised that they be allowed to go back to Akwa Ibom State, I insisted that the law must take its course. This is because nobody is above the law.

“As a responsive government, we have quarantined them in line with the relevant health protocols and they will be charged to court.”

The Rivers State Governor regretted that Federal Authorities are working dangerously to compromise the health protection system of Rivers State and thereby make vulnerable to coronavirus.

He said: “Some people want the escalation of the virus in Rivers State. People were paid to canvass a negative narrative on Carveton Pilots.

“We are doing what we can within available resources to fight coronavirus. You can fly , but as you fly and land, don’t enter our territory. ”

“Nigerians shake when they hear oil companies they shake because they have compromised. Imagine an appointed Minister issuing an order to an elected Governor. They wanted to rig us out and lost. Recall that the Former DG of DSS ordered his men to leave the INEC Collation Centre for the invasion of the Centre. They lost.

“The right must be done. We are talking about something that is killing people. They want coronavirus to escalate in Rivers State. The law must be tested. Make sacrifice and let us contain the virus.”

Governor Wike said that Rivers State cannot be manipulated from any Quarters.

“Nobody will use Rivers State as a toy. This Federal Government does not like us, but a government will come that likes Rivers State.

Governor Wike stated that the State Government followed due process in its actions against Carveton Helicopters. He noted that State Government was focused on implementing extant laws aimed at protecting Rivers people.

He said: “On 7th April, 2020, two pilots of Carveton Helicopters flew in and landed at the Air Force Base Port Harcourt with 10 (ten) passengers on board their Twin-Otter Helicopter without any prior notice or approval from the State Government and in clear breach of the extant COVID-19 Regulations and Executive Order. The pilots and 10 passengers were promptly arrested by security personnel and arraigned before the Port Harcourt Chief Magistrate Court in two separate charges. ”

Governor Wike noted that his administration established the right legal framework to assist it effectively fight against the spread of coronavirus.

Governor Wike said that the second case in Rivers State has been discharged. He thanked God for his blessing to the State.

The Governor said that the law will take its course.

He said: “People selling Akara are being charged to Court in Lagos. But they want us to allow oil companies to flout the law. I am a boy to Rivers people, not to anybody outside Rivers State.

The Governor praised the management of the NLNG for cooperating with the State Authorities to fight the spread of coronavirus.

“I must commend the management of Nigerian Liquefied Natural Gas Limited (NLNG) for obeying the established health protocol to check the spread of coronavirus. They have consistently liaised with the State Government in the movement of their staff on essential duties. This is what is expected of a responsible corporate organization,” he said

The Governor expressed gratitude to individuals and corporate organizations that have strengthened the state’s capacity to fight coronavirus.

He said: “Our pragmatic leadership style has therefore earned our state individual and corporate support that have strengthened our prevention strategies.”

He said: “I directed the Palliatives Committee to ensure that their activities must not be partisan, religious or ethnic based.

“Let me State here that following my directive, the committee adopted a community based approach in the discharge of its assignment.

The distribution of the foodstuffs is supervised at the ward level by a five-man committee made up of a clergy man, Traditional Ruler, Community Development Committee Chairman, Woman Leader and Youth Leader.

The Governor, however, announced the suspension of the ongoing distribution of palliatives due to complaints by some members of the public.

He said: “In order to make the exercise more inclusive, members of the civil society and the media .”

Governor Wike stated that the State Government established a Food Purchasing Committee with a directive to buy foodstuffs and fish from Rivers Famers. The Committee, he said, has procured foodstuffs and set up food banks in the 23 Local Government Areas of Rivers State.

He said that it is imperative that all companies or organizations doing full or partial business in the state support efforts at containing coronavirus.

“Failure to support us shows total disregard for corporate social responsibility. I want to sincerely thank all individual and corporate donors who have supported us in the fight against COVID-19. At the appropriate time, the Rivers State Government will publish their names in National Dailies and Local Tabloids for posterity. These individuals and corporate organizations are indeed friends of the State,” he said.

Governor Wike said his administration chose to be proactive because it places premium on the lives of Rivers people.

He pointed out that Rivers State was the first State to close her borders to check the spread of coronavirus. He noted that this step was greeted by criticisms at the time, but several states have emulated this pragmatic approach.

“We were the first state in the Federation to close our borders. This attracted criticisms, but we have been vindicated as other states emulated this positive strategy.

“Even though we have recorded two cases ,the index case has been discharged while the second case is doing well at the Treatment Centre. It is obvious that our containment strategies: closure of borders, closure of schools, closure of markets, closure of night clubs, closure of Cinemas, as well as the ban of public worship, ban of public burials and weddings have helped to check the spread of coronavirus.

“This is in addition to the conduct of our healthcare professionals who have demonstrated a high level of patriotism and sacrifice in contact tracing and case management,” he said.

The Rivers State Governor warned those plotting to disrupt the distribution of palliatives will be sanctioned. He pointed out that some persons only criticise for the sake of political mileage and not to add value.

He informed that the Rivers State Security Council will lockdown some parts of Port Harcourt where some people continue to disregard Government directive of social distancing.

The Governor said that nobody can threaten Rivers State with strike. He said the state is ready to tackle anyone trying to compromise the health of the State.