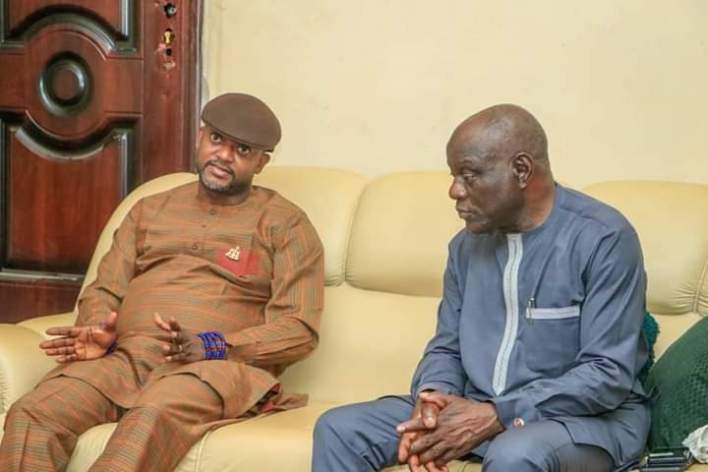 Captain Joe lost his first son, Mr Stephen Agada to the cold hands of death after a brief illness which he revealed did not last more than 5 hours. The Deputy Governor described the death as tragic, whilst conveying the warmest condolences of his boss, Governor Yahaya Bello. He prayed with the family, hoping that God almighty would assuage them the strength to go through the trying period. According to him, he also visited because of the long standing relationship he has with late Steve from Jos and had been a big brother to him while he was alive.

The emotional Captain Joe thanked him for coming, disclosing how it was out of his expectations to see the Deputy Governor visit him at critical time of bereavement like this.

In Agaliga-Etukwo, the remains of Professor Abdul Odiba was cremated in front of his house with glittering tiles. However, tears and despair soaked the atmosphere before the arrival of the Deputy Governor who described Prof Odiba as an academic giant swallowed by the earth at 60 years of age. He says the loss is to Kogi state and the academic community entirely. He revealed how man cannot question God in some circumstances. He encouraged the children to take after their father in excellence, he also prayed that God will flesh them with strength to sail through the mourning period.

He held up both families in prayers, asking God to be their comforter.

Earlier on, Chief Onoja made stops at the over 30 kilometers stretch between Itobe-Ojodu. Covering Alo-Ofueke before Ajegwu, Ogwunoda- Achigili, and Achigili- Ojodu, which are hot spots of Security volatility with incidents of kidnappings in the past weeks. He took adequate Security briefing from the locals in the various communities, promising that the Government of Alhaji Yahaya Bello does not compromise on issues of security, hence, upscale of security Mobilization would be tethered to those regions.

A security vigilante member from one of the communities also testified how Helicopter patrols were seen hovering over their communities immediately the incident took place, stating that two days after, they received news of the kidnapped victims regaining their freedom.