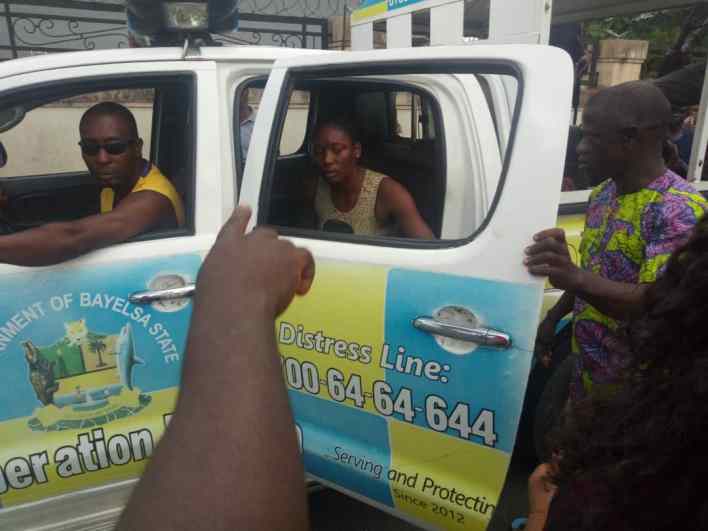 Yenagoa – Police has arrested two alleged armed robbers along Old Assembly Quarters Road along Azikoro Road when a female POS operator raised an alarm over the forceful dispossession of her valuable items stand on Wednesday evening.

According to an eyewitness account, the three young men pointed a gun at POS operator and demanded for all monies and phones in her possession which she immediately released to them.

The eyewitness said, they succeeded in obtaining her belongings but the girl who noticed that only one of them had a gun, she decided to dive him while the other two took to their heels from the scene.

The eyewitness narrated that while she was struggling with him, the attention of the community boys who were around were attracted to the scene and ran to help her.

The community boys rescued her and chased after the two other ones.

Unfortunately, two of them were caught and given the beaten of their lives, the eyewitness noted that it could have been a case of jungle justice if not for the timely intervention of men of the police force.

He explained that the arrival of policemen arrested the situation and apprehended the two alleged day time criminals after enough persuasion of the angry mob.

Narrating their experience, residents of the area lamented that armed robbery activities is a routine thing in the area, even in broad daylight lamenting that the activities of these notorious criminal ranges from dispossessing innocent people of the values like phones, money, raiding shops and other business outfits along the area thereby leaving the people in the area in an awful situation.

Recall that it was the same place the 23-year-old Bayelsa female barber was robbed in her salon where she works, these activities are believed to be perpetrated by some gang who knows and lives the area.

However, they call on security outfit to make frantic efforts to start a frequent patrol in the area to help residents and businesses around the area to live peacefully.

Efforts to reach the PPRO of the Bayelsa State command prove abortive.

See photos as captured by our reporter