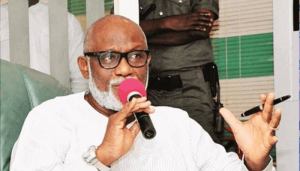 Governor of Ondo state and Chairman of South West Governors Forum, Rotimi Akeredolu has sent a warning message to bandits to stay clear of the South West as Yoruba people of the region would not allow a repeat of the attack on St Francis Catholic church, Owo where over forty persons were killed.

Governor Akeredolu declared that the people of the South West would not tolerate another malicious attack on the region under any guise.

He came out with this when he received Governor Dapo Abiodun of Ogun State, Governor Babajide Sanwo-Olu of Lagos State and Governor Abdulraman Abdulrazak of Kwara State stressing that the people of Ondo and the South West region at large have always maintained a peaceful disposition in the country.

The Governors were in Ondo State to pay a condolence visit to Governor Akeredolu over the attack in Owo, Former governor of Ogun State, Ibikunle Amosun was also part of the entourage.

The Ondo state governor thanked the governors for their solidarity describing their visit as not just symbolic but important.

BBNaija Cross Accuse Angel of Flirting With Him