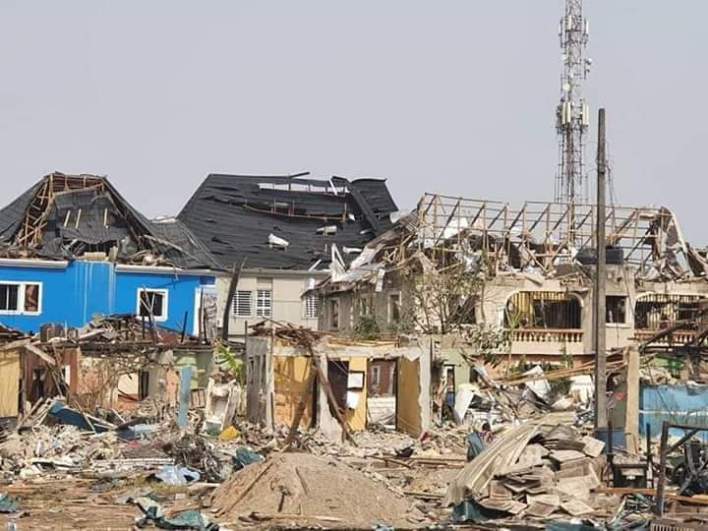 Nigerians woke up Sunday to yet another horrendous tale of hell letting loose on our people in a massive proportion but not with any pinch of surprise. It is not surprising because such stories have become a recurrent decimal in the annals of our history. Sadly, recent times have recorded a carelessly heightened frequency at which these incidents occur all on account of what we do or adamantly refused to do.

It is either we are counting the charred and shattered corpses of our people bombed by Boko Haram terrorists in the Northeast or sympathizing with families whose loved ones have been dispatched to early grave by bandits in the Northwest or we are organizing a mass funeral for victims of Fulani herdsmen terror in the North Central. If we are not doing any of these, we are talking about victims of gas explosion in Kaduna, Onitsha or Edo. The story is not different from all other parts of the country where citizens have incurred humongous losses connected to fire, flood and other disasters linked to human activities.

The Abule-Ado, Lagos incident brought with it tears of sorrow and pain of agony to dozens of families whose loved ones were caught up in the pipeline carnage and indeed all Nigerians. At the risk of sounding like a prophet of doom, the number of dead persons currently put at 23 will likely increase over reasons bordering on the comatose nature of our health institutions. We can only wish the hundreds of victims laying at various hospitals in Lagos a quick recovery. It also goes to say that many families will be rendered homeless as a result of the fatal impact that affected no fewer than 50 houses around the scene of this disaster. My heart is with the management and staff of Bethlehem Girls College where about 50 pupils were said to be injured, along with their Principal, Rev. Sr. Henrietta Alokha who later paid the supreme price rescuing the schoolgirls.

The question that readily comes to mind is, could this disaster have been averted? Could precautionary measures be taken to ensure the safety of our people without waiting for incidents of such nature to first occur? Was any lesson learnt from this tragedy? Again, our fixation for reacting to issues in a fire brigade approach as against being proactive and nipping them in bud has continued to expose our lethargic attitude and lack of value for human life. This cannot be extricated from greed and unpatriotic quest for wealth with which some elements have carried on over value for human life. Our penchant for having round pegs in square holes is also a reason for worry.

Elementary knowledge teaches that petrol pipelines all over the world are not left on the surface of the earth as a result of the inflammable nature of the products they convey. In our dear country where regulatory agencies are either totally missing, perpetually sleeping on duty or corruptly compromised, anything goes irrespective of a ticking doom it carries at its back. Undoubtedly, considerations were not made regarding the environmental and human effects of the exposed pipelines during their installations. If proper environmental safety standards were strictly adhered to, the March 15, 2020 Abule-Ado hell would have been forestalled. Questions have also been raised about the quality of these pipelines across the country. Some of them have existed for over 30 years and possibly outlived their lifespan. Yet all blames are hipped at the doorstep of vandalism even when due diligence are not conducted. No one is called out for negligence of duty.

The authorities in Lagos state would not feign ignorance of the existence of pipelines in the affected community yet it went ahead to allocate lands for residential purpose to the unsuspecting citizens. Avarice and unbridled quest for profit maximization will not stop dealing us a deadly blow where profiteering is placed above the sanctity of human life. We are a nation that has refused to learn from our mistakes. The same way electricity cables continue to roast our people inhabiting right under them across the country unabated, the catastrophe of pipelines fire, gas explosion and related calamities may tarry a while. How can we forget in a hurry the Calabar viewing centre electrocution that terminated the dreams of dozens of our youths? We learnt nothing. Has land allocation under electricity cables stopped?

I must commend the efforts of Lagos state government under the leadership Babajide Sanwo-Olu for its swift intervention at mobilizing rescue team comprising various security agencies and NGOs to the site. This led to the rescue of 3-year-old girl identified as Favour whose mother was critically injured at the incident. How the little Favour survived under the rubbles a day after and emerged unscathed still beats the imagination of many. Applaudibly, the state chief executive has also set up N2billion relief fund for the victims. However, hardly is there any Nigerian that is not disappointed with unpresidential attitude President Muhammadu Buhari has displayed over the entire scenario. It took the number one man in the land over 6 hours after the explosion to identify with those affected in the incident and reassure his citizens the readiness of his administration to enhance the protection of their lives and property, even though Nigerians no more place any premium on such hoaxy assurances. The man who pontificates as the president of all Nigerians did not deem it necessary to physically be at the scene to have an on-the-spot assessment of what happened. He rather chose to stay at his palatial office to gawk at the hard copy images of the horrific occurrence during a briefing by the Lagos governor. This is as insensitive as it is unacceptable.

The speculations that the pipeline narratives being bandied about could as well pass as a ruse is now a job the panel of inquiry set up by the Lagos state government is expected to carry out. Until then, no one can say with certainty whether the Abule-Ado explosion is an orchestrated terrorist attack or otherwise. It is too early in the day to engage in finger pointing while the hearts of the victims’ families still bleed profusely.

Lastly, we must guard against the unnecessary loss of lives of citizens by putting in place measures that will avert the Lagos-like incident in the future. This includes the installation of anti-explosive devices and strict adherence to safety standards. We can’t continue in this culture of one minute silence in ‘honour’ of the departed.