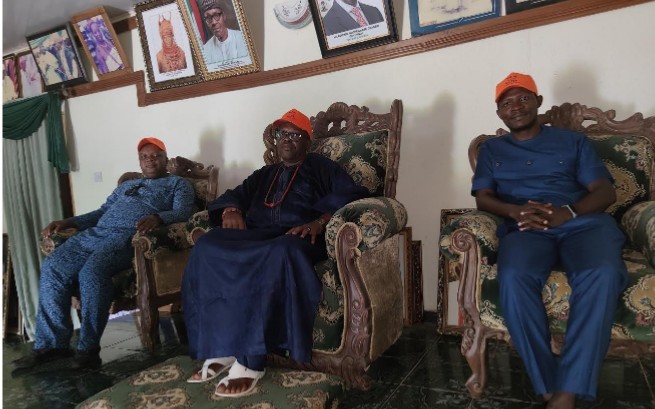 Traditional Rulers in the country has been charged to join in efforts to end all forms of violence against women and girls.

The charge was made when Mr. Monday Osasah, Executive Director of Africa Centre For Leadership, Strategy and Development otherwise known as Centre LSD, and the Centre’s program officer for the Spotlight Initiative male engagement project, Mr. Vincent Dania, paid a courtesy visit to His Royal Highness, Oba Sule A.T Idaiye, the Imah IV of Somorika and South-South co-ordinator of the National Council of Traditional Rulers of Nigeria.

According to a statement signed by Vincent Dania states that the purpose of the courtesy visit was to, amongst other things, brief the king of the work in engaging men, boys, religious leaders, and traditional leaders in efforts to end all forms of violence against women and girls.

Centre LSD and appealed to the traditional ruler to use the influence of his position to mobilize traditional rulers in the south-south geopolitical zone of Nigeria to take more proactive actions in curbing the rising tide of sexual and gender-based violence in the region.

The call for more influence by South-South traditional rulers to do more in empowering women, preventing and addressing all forms of violence and harmful practices against women and girls

The centre enjoined the South-south Coordinator to Influence other traditional leaders in the region to support the Spotlight project whose goal is the elimination of all forms of violence and harmful practices against women.

While appealing to them to participate in the High-level virtual conference on the “Role of Traditional Leaders in Ending Violence Against Women and Girls in the Midst of the COVID-19 pandemic” being organized by male engagement implementing partners on the Spotlight project.

According to the statement, His majesty warmly received them to his palace, and even wore the campaign face cap while sitting on his throne to show his support for our project.

The monarch granted all the prayers and promised to use his position to engage his community and traditional rulers in the south-south to ensure that proactive measures are taken to eliminate all forms of violence and harmful practices against women and girls.