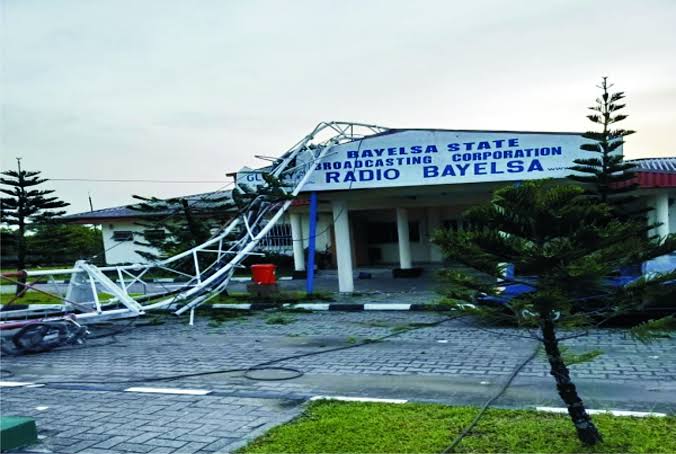 The Bayelsa State Broadcasting Co-operation known as Radio Bayelsa “Glory FM 97.1, the Jewel of the Niger Delta was established in 1999 by Chief D.S.P Alamieyeseigha as the then first Executive Governor of the State, located at Ekeki along Azikoro Road in Yenagoa.

Radio Bayelsa, also known as Glory FM became the first public Radio Station in the State with quality news content and news talks is delight of the listening general public with the best announcers and presenters.

The State Broadcasting House is a parastatal under the State Ministry of Information and Orientation aimed at disseminating the policies and programmes of government to the public.

This reputable establishment through the tax payers’ money has paid its dues and impacted greatly on the listening public as well as given birth to other private radio stations in the state with wide coverage. News, Musicals and Current Affairs programmes are very rich.

It would be recalled that on the 2nd of July, 2019 Radio Bayelsa went off-air following a fire incident that destroyed the studio, Accounts department and other units. Later the station resumed transmission after the fire outbreak. There were allegation of sabotage and counter allegation of ineptitude and negligence but all are now history.

Most unfortunately, on the 3rd of March, 2020 a terrific storm pulled down the mast of the Radio House at night, destroyed the main building and part of the perimeter fence, while vehicles and other official equipments of the Corporation were also damaged.

The miracle governor, Senator Douye Diri and other sympathizers have visited the scene for a spot assessment but the big poser is who is going to salvage or resurrect our darling Radio Bayelsa, “Glory FM, Jewel of the Niger Delta?

I am urging the State Government and other spirited philanthropists to come to the aid of Radio Bayelsa without delay so that this mother Radio Station get back to its feat that is good at informing, entertaining, educating and even evangelizing the listening public. The onus is on the state government, that government without its mouthpiece or radio house doesn’t portray the government and the state any good.

How long will the programmes of government continue to be aired in private radio stations? Necessity is the mother of invention! On a spot assessment to the station, I bemoaned the level of destruction that befell our state owned corporation.

I suggest that a new radio House should be erected and furnished with the best digital equipments. The current site of Radio Bayelsa is over stressed due to the swampy terrain. There is need to dredge or sand filled the area to accommodate such an enduring edifice that can stand the test of time.

Solomon Olali Igabo is a public commentator based in Yenagoa, Nigeria