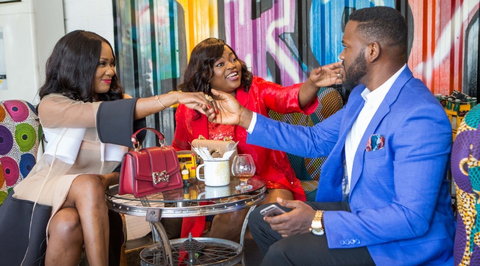 A 2019 Nigerian political comedy film directed as by Funke Akindele as her directorial debut, satire on the culture and attitude of politicians during electoral campaign. This week, Dim Oba takes us through another motion picture that exposes the vulnerability of our political system.

Plot
A bumbling billionaire businessman and failed Presidential candidate Chief Olalekan Ajadi (Akin Lewis) is very much obsessed with US President Donald Trump. Just when his political campaign looks on the verge of another flop disaster, Ajadi is anointed by a majority party and becomes a tough credible contender with the assistance of powerful social media.

At a drinking bar, Chief Ajadi and his younger brother were obstructed by a preacher who prophesies about his ambition of becoming a president after several failures, they didn’t talk it as something important and walks out. Just as they are about to enter his car, Chief Ajadi gets a phone, he is being invited for a meeting by another Political party to become their presidential candidate in the presidential Elections, he appears uninterested but is convinced by their proposal and he accepts their proposal.

His first wife had abandoned him and taken the children to London. Chief Ajadi breaks the news to his second, who was his maid but decided to stay with him and becomes the arrowhead of his campaign. She deploys the use of the social media to gather support for the presidential ambition of her husband, Chief Ajadi. When the news of Chief Ajadi jumping ship to another party and subsequent emergence of the presidential candidate, his first wife decides to return with the children to take her place as the First Lady, when Chief Ajadi eventually wins the general election.

Her return becomes a tool against the presidential ambition of Chief Ajadi as his opponent peddle false information about his marital status. He manages the situation and still maintain his second as his wife and will become the First Lady when he wins the election. All efforts of the first wife fails even during the campaign.

Review
Your Excellency, is the directorial debut for Funke Akindele, a fast rising comic actress, and producer. She plays the lead role alongside stars actor, Akin Lewis, Lala Akindoju, Shaffy Belo, Kunle Coker, Eku Edewor, Alex Ekubo as Kachi, Osas Ighodaro as Candy, Oreka Godis and Ini Dima Okojie. The cast list is a mix of up-coming and veterans in their rights making the movie a must watch as against the herald of stars. Based on the directorial approach, all the actors and actresses on set were at their best performance giving real interpretation to the characters in the movie.

Akin Lewis who plays the role of Chief Olalekan Ajadi comes in a dramatic dexterity and fluidity in the interpretation of the role with ease. Your Excellency is one of the unusual Nigerian movies where you see actors come with a distinct interpretation of their roles different from similar character in another movie they may feature. Funke Akindele did a good job in this regard. Akin Lewis takes up his role smartly through the dancing, acting and singing telling his fans that he is a multi-talented actor that can take up the challenge in any role.

With the unusual blend of character interpretation, the central theme of the movie for me is quite striking. The script is woven in such a manner that the audience will need a great depth of political history in Nigeria to understand the dynamic of the character, Chief Olalekan Ajadi. Chief Ajadi is the centrifugal force that pushes and pulls motiffs, actions and characters in the movie. He depicts courage, resilience and high sense of purpose in a highly volatile political environment influenced with the negative tide of the social media waves. But, despite the negative vibes from the social media, the victory of Chief Ajadi is attributed to it when the unedited leaked video shows the best side of him at eve of the election day.

While the unedited leaked video finds its way on various social media handles, Chief Ajadi is focus on building a better family with his second wife despite the imminent lose at the election. He commits himself to her in a bid to reassure her of his commitment to stand with as reward for not leaving when he lost his previous bids to become the president of the country. Such characters are rare in the Nigerian space thus Chief Ajadi needs to be celebrated for standing with people otherwise forsaken by others.

The philosophical nature of the character, Chief Ajadi is visible in his interaction with people, his down-to-earth approach during his campaign; while his first wife tries to disagree with him on his choice of dance step, he leaves her connect with his followers through the dance step which became popular and synonymous with him. This is a usual characteristics of a typical Nigerian political and their followers. The fascinating characterization of Chief Ajadi is the colouration of different shade of the Nigerian politician.

Overall, the movie inspires hope for politicians not to give up but continue to strive and not give to chance. The interplay of religious, social media and godfatherism are major factors politicians must not overlook in their quest for elective position despite their perceived negative impact.

The film had its theatrical release across 50 theatres on 13 December 2019 with an estimated gross earning of over N20 million in two days and as the fourth highest grossing Nollywood Film for the year 2019 with N105.5 million according to the Cinema Exhibitors Association of Nigeria (CEAN).

With this huge amount, the film is sure a good film in terms of character interpretation, picture quality and audio clarity but with few technical errors due to production budget. Most of this errors are seen during the crowd scenes while in some cases the director overlooked some details in continuity, set design and actions by actor.

Funke Akindele, kudos on your directorial debut, it is a gigantic production, everybody knows how expensive and the challenges women face to run for a political office in Nigeria but with this effort, you have inspired more women to seek for what they want in any area of their lives.