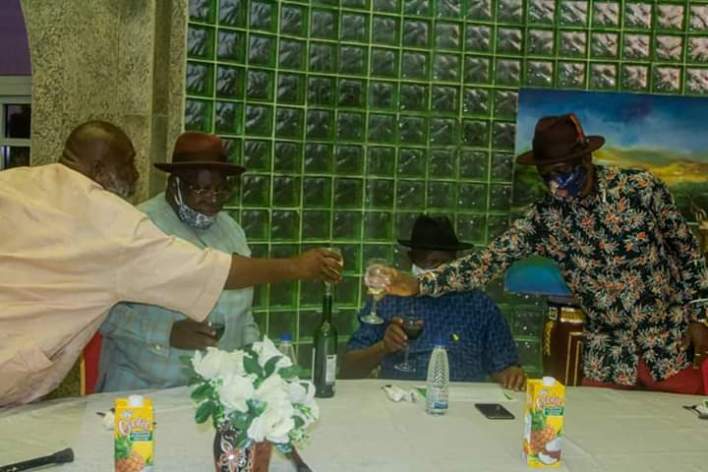 Bayelsa State Deputy Governor, Senator Lawrence Ewhrudjakpo has dedicated to God the Appeal Court victory of the Prosperity Administration, describing it as another divine intervention in the affairs of the state.

The Deputy Governor made the remark on Tuesday while leading a pack of notable political leaders of Bayelsa West Senatorial extraction to celebrate one of the state founding fathers, Chief Francis Doukpola, on the occasion of his 76th birthday celebration.

Senator Ewhrudjakpo who spoke at the event which held at the Golden Tulip Hotel in Yenagoa, also thanked God for the Appeal Court judgment in favour of Governor Douye Diri, himself and the Peoples Democratic Party.

In a statement by his Senior Special Assistant on Media, Mr Doubara Atasi, he noted that the present administration has implicit trust in God and due process, and therefore would not join issues with the opposition in the media.

The elated Deputy Governor also expressed gratitude to Bayelsans for their abiding support for the PDP, noting that the judgment has further authenticated the validity of the primary election that produced the Governor and himself as candidate and running mate of the party for the 2019 governorship polls.

He extended the olive branch to all aggrieved members of the PDP and other parties to sink their differences to work cooperatively with the Prosperity Administration led by Governor Diri to move the state forward.

His words: “We are grateful to God because of what He has done again for us as a government and as a party. Today (Tuesday) another landmark victory has come our way.

“It’s not by our power or smartness but the Lord’s doing so we remain eternally grateful to Him. I say so because my father taught me that there is no wrestling that is small.

‘Let me therefore used this opportunity to thank all Bayelsans, on behalf of the miracle Governor of our state, Senator Douye Diri, our immediate past Governor Seriake Dickson for all your support, prayers, steadfastness, commitment, diligence and response to duty”

Senator Ewhrudjakpo who acknowledged the role played by elderstatesmen such as Chief Doukpola, Thompson Okorotie and Hon Fyneman Wilson in the last governorship elections, said the administration would not forget their efforts and sacrifices.

He described the celebrant as a great asset to Bayelsa, Ijaw nation and Nigeria as a whole on account of the worthy contributions he is making towards nation building and development of the state.

According to him, “The man whom we are celebrating today (Chief Doukpola) is an asset in every ramification. He is an asset not only to his family, Agbere community, constituency 3, Sagbama Local government, Tarakiri Clan, Bayelsa State and Ijaw nation but also to the Federal Republic of Nigeria.

“That is why he is given the honorary title of Member of the Federal Republic (MFR) because of the dues he has paid.
Personally, I will not forget the role he, Chief Okorotie and Hon. Fyneman Wilson played in my Senatorial election and the 2019 governorship elections. He stood firm by me when it mattered most.”

In his remarks, Chairman of the occasion, Chief Thompson Okorotie described the celebrant as a close friend and fellow compatriot in the struggle for a better Bayelsa and Ijaw nation.

According to Chief Okorotie, he knew the celebrant while serving as the Deputy Chief Whip of the Old Rivers State House of Assembly when Doukpola also held sway as a ranking official of the African Continental Bank.

He noted that the one-time governorship candidate of the defunct All Progressive Party (APP) used his privileged position at the ACB to help several Ijaws because of his undying love for the Ijaw ethnic nationality.

Also extolling the virtues of the nonagenarian, the newly inaugurated State Chairman of the Peoples Democratic Party, Mr Solomon Agwanana, noted that politics in the Bayelsa West Senatorial District would not be complete without the celebrant and Chief Okorotie.

In their separate remarks, the member representing Sagbama Constituency 3 in the state House of Assembly, Hon. Salo Adikumo and former Commissioner for Youth Development, Hon Victor Okubonanabo prayed God to bless the celebrant with more strength and wisdom.

Highpoint of the occasion which had several notable politicians including the immediate past PDP State Chairman in attendance, Mr Moses Cleopas, was cutting of the birthday cake conducted by a former lawmaker and commissioner for education, Dr O. O. Osusu.