Food Wahala in #BBNaija How the Trouble Started

Day 9: Food worth fighting for

The Housemates got into a heated argument, and resolved it like bosses!

There are many moments in life when fighting is necessary and valid, but today in Biggie’s House the food issue caused so much drama that it nearly burst our brains! The whole situation kicked off in the kitchen when our regular cook, Ka3na went off on Tolanibaj for dishing out after having eaten earlier in the morning. Tolanibaj then rudely reiterated that Ka3na‘s policies around food are not practical. This elicited many different responses and started the biggest fight we have seen in the Household so far. There were screams, swear words, and threats so strong that even Biggie would have shuddered when hearing them.

Of the people most offended by her stance, Tolanibaj and Praise were the most vocal. If you repeated any of the words they said at work, you would find yourself unemployed and recovering from a slap. Luckily cooler heads prevailed and the Housemates sat down at the table to discuss the issue and come to a common understanding. 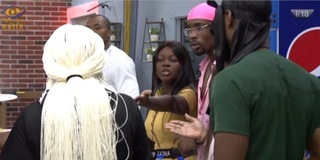 Prince was the most level headed and set the tone for the reconciliation discussion when he stood up to talk. He made sure that the Housemates knew that this discussion is all about getting to the bottom of the divisive issue around cooking and who should be allowed to eat. Then Ozo followed him with the defining thought for Housemates reconcilation meeting, stating “If you don’t want to be loving, at least be respectful.” Neo added to that sentiment of understanding, reminding the Housemates that tolerance and respect are owed to everyone, regardless of how angry you may feel at that particular moment. 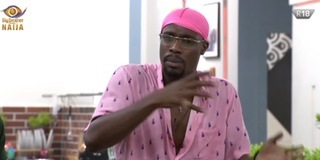 Then it came for Praise to speak his mind and even though he was on the edge of tears for the entire time, he still managed to get his point across. The majority of his extended tirade focused on the idea that respect is reciprocal and this was lacking in his interactions with Lucy. Praise mentioned how he would love to stay friends with everyone in the House even after Big Brother is done, and moments of disrespect make it difficult. 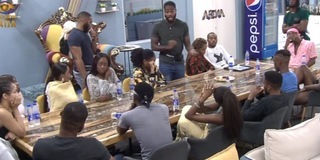 Dorathy also said that if food is causing the issue then maybe the thinking around it should change. Nengi also had words for Ka3na‘s behaviour around food and told her that as the mother of the house, statements like the ones she made earlier have no place in the house. Laycon rounded out the conversation perfectly when he noted that “The comfortability you are used to in your house, you won’t get here.” In that statement, he summed up a reality the Housemates all knew to be true, that in Biggie’s House, nobody is boss until we chose a final winner.

Exercise your power to keep your favourite Housemate in Biggie’s House by voting here. You can also download the MyGOtv and MyDStv apps for additional Votes. Stay tuned to Big Brother Naija on DStv channel 198 and GOtv channel 29, brought to you by headline sponsor Betway, and gold sponsor Guinness. You don’t wanna miss out on any of the action so sign up on DStv or get GOtv Max or Jolli.  Stay plugged into all things #BBNaija on the website and follow us on YouTube, Instagram, Twitter, and Facebook.