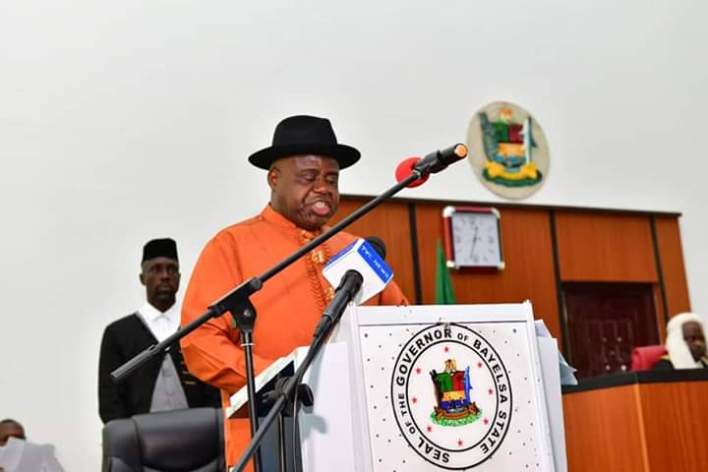 Two months after he took office, Bayelsa State Governor, Senator Douye Diri, on Tuesday, presented an appropriation bill of N242.283 billion for the 2020 fiscal year to the state House of Assembly.

Presenting his maiden budget estimate christened, “Consolidation for Prosperity 2020,” Senator Diri said the appropriation bill defines the structure for the economic activities to be undertaken in the fiscal year.

In a press release by his Acting Chief Press Secretary, Mr. Daniel Alabrah, the governor emphasised that the policy thrust of his administration in the next four years remains consolidating on the gains already made by the previous government.

He said his administration would embark on special programmes and projects aimed at wealth creation.

Accordingly, he said his administration would encourage the people to participate in agriculture, small and medium scale enterprises and create opportunities toward attracting the private sector for industrialisation.

On the current economic outlook, the governor said as a result of the ravaging effect of COVID-19 on the global economy, there was need for prudent management of resources.

He said the price of crude oil had nosedived drastically as against the federal government’s benchmark pegged at $55 per barrel thus affecting revenue from statutory allocations from the Federation Account.

As part of efforts to reduce the cost of governance and enhance transparency, Senator Diri maintained that the human resources, financial reporting, budgeting and procurement component of the state’s Integrated Financial Management Information System (SIFMIS) would be fully implemented this year.

The governor, who assured that his administration would continue with the implementation of the Federal Government approved minimum wage for workers, said the payment of gratuity arrears had already commenced for pensioners.

In his remarks, Speaker of the House of Assembly, Rt. Hon. Abraham Ingobere, commended Governor Diri and his team for the steps taken by his administration to prevent the spread of COVID-19 into the state.

He stressed the need for the state government to adopt more strategies to raise funds from alternative sources and seek ways to cushion the effects occasioned by the virus.

He assured that the assembly would expedite passage of the appropriation bill.