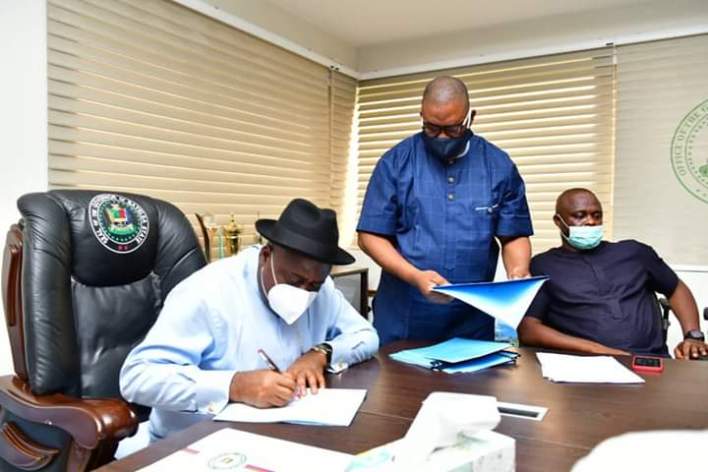 With the signing of the bills into law, Bayelsa is now among states in Nigeria that adhere to the International Public Sector Accounting Standards (IPSAS).

While signing the bills, the governor was quoted in a statement by his Acting Press Secretary, Mr. Daniel Alabrah, that the laws would check the excesses of those saddled with the responsibility of procurement in government’s Ministries, Department and Agencies (MDAs).

“Before the Public Procurement Law was enacted, the United Nations observed that for every one naira spent in Nigeria, about 60 kobo was being wasted.”

The governor stressed that an effective procurement system cannot be achieved without transparency and the active participation of the citizens in the budgetary process.

He added: “It is very necessary to bring out a bill that will check the wastefulness and excesses of those who are in charge of procurement because this is going to be a warning to all of us who are involved in the procurement processes.

“You must adhere strictly to the amendment that has been signed into law today. And this is to safeguard even those involved in the procurement processes. This would check wasteful expenditures if we keep to all the rules and all the regulations of the amended public procurement law.”

He commended the lawmakers for painstakingly deliberating on the bills.

Earlier, the Speaker, Rt. Hon. Abraham Ingobere, assured the governor of the commitment of the House to the well-being of people of the state.

He said the legislative arm would continue to work hand in hand with the executive in order to accelerate the socio-economic growth of the state.

Ingobere disclosed that the House received the executive bill on May 13, 2020 and it was able to conclude the process within seven days.

“We carefully studied the bill, the amendment section and it is in the best interest of the state,” he said.