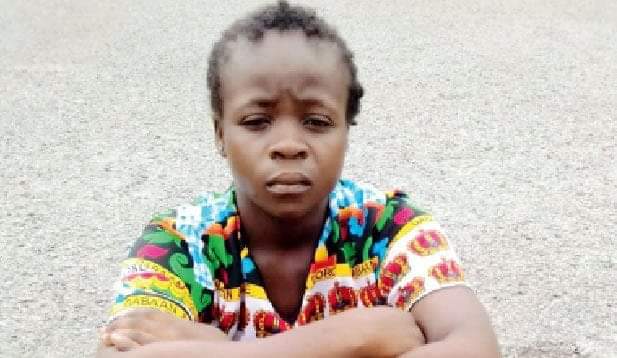 Tears welled up on the face of 22-year-old indigene of Benue State, Mrs Veronica Mohammed, as she spoke to Saturday PUNCH in a broken voice. She was alleged to have killed her husband over a trivial matter.

Trying in futility to hold back tears, Mohammed said, “My parents who brought me to this world have humiliated, cheated and frustrated my entire life. If I knew early enough that the people I stayed with weren’t my biological parents, I would have run away from them. I was deceived and introduced to fake parents by my own blood sister. What a wicked world!

“My parents violated my human right and my late husband, Anyakwo Mohammed, who impregnated me without paying my bride price, deceived me. It was frustration and anger that pushed me to stab my late husband. The time he brought in another lady with pregnancy worsened the situation. Since this incident happened, I have been unhappy. I called my husband’s brother working with the Nasarawa Broadcasting Service to plead on my behalf. I have sinned against them. My late husband’s brother said I should not worry that it was how God wanted it for there was nothing they could do to bring their late brother back to life.

“I am begging the commandant of Nigeria Security and Civil Defence Corps to forgive me and help me to get out of my predicament. I was arrested by the NSCDC. I am being neglected by my family members even those I refer to as my parents have also abandoned me to my fate.’’

Mohammed was said to have allegedly stabbed her husband to death for impregnating another woman.

The incident occurred on April 28, 2020, at Obene ward area in the Keana Local Government Area of Nasarawa State.

Mohammed, who could not complete primary school from Army Children School, Makurdi, the Benue state capital, said she and her late husband dated for four years before he impregnated her with a promise that he would marry her if she converted to Islam.

“I regret my action; May his gentle soul rest in peace. I did not know that he would die. I have been having misunderstanding with my late husband over a woman he impregnated and it led to constant quarrels and fighting. I got tired of it all. I returned from my ‘parents’ house and was told that Mohammed was with another lady whom he impregnated and when I asked him if the pregnancy was his, he refuted. He only said the lady was his girlfriend but the pregnancy wasn’t his.

“We stayed together with the lady but she left before this incident happened. My late husband promised to marry me if I could change my religion. But when we started having constant quarrels, I was discouraged to do that.’’

Narrating what led to the incident, she said she asked him to give her his phone and he refused thus a disagreement ensued.

She added that she roasted some yams on that day, adding that she went inside the bedroom to pick a knife to peel the yams.

Mohammed stated that while peeling the yams, she told her late husband he wouldn’t share out of it but he insisted and stood up to fight her and in the process he held her hand and she didn’t know how the knife hit him. He said the incident happened in the night and before he could be rushed to a hospital, he had died.

She added, “My late husband visited my people twice and bought them some things. I have a two-year baby for him. The baby is in Lafia with my husband’s family.

“My sister told me that the man I thought was my father is not my biological father. I heard my sister telling her husband that my story is not a good one. I listened to their conversation and I didn’t say anything to interrupt them. I asked the man who I believed was my father if he was my biological father and he said I should not mind my sister. I just became confused.’’

The Commandant, Nigeria Security and Civil Defence Corps, Mr Mahmud Fari, said the suspect would be charged to court upon completion of investigation.

Fari said the suspect stabbed her husband to death over an alleged dating of another woman, adding that the suspect claimed that the deceased only kept her without any legal marriage between them.

He added, “She confessed to the crime and pleaded that justice be tempered with mercy because she has a baby girl of two years and also two-month pregnant for the deceased.’’