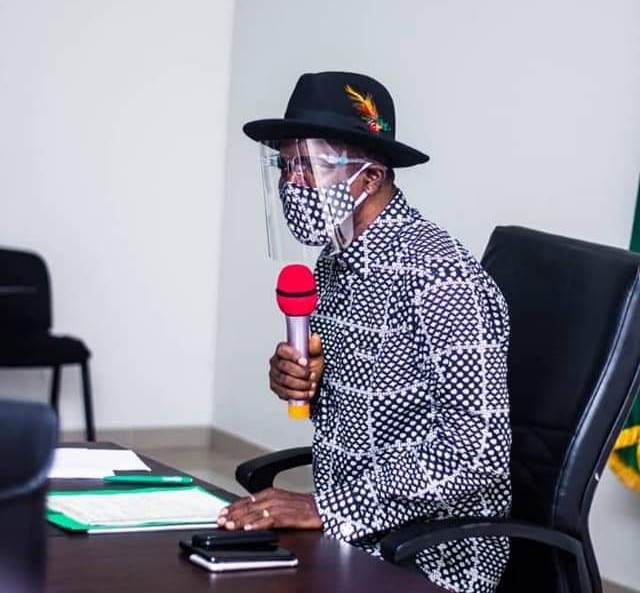 The Bayelsa State Government has set up an 18-member committee to look into the issues of promotion and minimum wage raised by labour unions in the interest of industrial harmony in the state.

The State Governor, Senator Douye Diri inaugurated the committee headed by the Secretary to the state Government, Rt Hon Konbowei Benson during a meeting with Local Government Chairmen and representatives of the unions in Government House, Yenagoa.

The Governor who was represented by his deputy, Senator Lawrence Ewhrudjakpo charged the committee to determine the financial implications involved in implementing the new minimum wage at the local government level.

A statement by the Senior Special Assistant on Media to the Deputy Governor, Mr Doubara Atasi, noted that the Committee, which has the Chief of Staff, Government House, Chief Benson Agadaga as Co-Chairman was given three weeks to submit its report.

According to the statement, the Permanent Secretary, Ministry of Local Government Administration, Mrs Ebiere Igodo Adeh is to serve as automatic member and Secretary of the Committee.

While the state Chapter of National Union of Local Government Employees, NULGE, its Medical and Health Workers Union and the Nigeria Union of Teachers, NUT, counterparts are to nominate two representatives each as members.

Other members include two representatives each from State Universal Basic Education Board, SUBEB, All Local Governments of Nigeria, ALGON, as well as Local Government Treasurers and Head of Personnel Management.

His words, “This Committee is to take a comprehensive look at what is entailed in implementing the new minimum wage for local government employees which comprises the health workers and primary school teachers and not only the traditional council workers.

“You are to work out the additional money that is required to implement the minimum wage with promotion and without promotion and what is coming into each local government in terms of allocation.”

The Governor who urged local government Chairmen to make prudence and due process their watchword, said they would be held responsible for payroll racketeering and other grave infractions that will be discovered in any council.

He wondered why government’s financial obligations to pensioners keep increasing due to retirement but without a corresponding reduction in the wagebill of active workers in the councils.

Describing this trend as unacceptable, Governor Diri promised to leave no stone unturned in his determination to sanitize the local government system.

According to him, “If you go to our local government councils, you find out that people retire and even die but the wagebills remain constant as the Northern Star.

“Pensions are increasing but the salary bill of those who are working still remain constant or even going up. This is unacceptable to me. And so, I’m prepared to be called names again.

“But at the end of the day, posterity and history will judge who served the cause of justice, fairness, progress, prosperity and the cause of integrity.”

Earlier in their separate submissions, the state Chairman of ALGON, Hon Nigeria Kia and his NULGE counterpart, Comrade Akpos Ekiegha pleaded with the state government to revert to the pre-2016 Recession funding system of 60-40%.

They opined that, if the state Government shoulders 40% of the total wagebill of the local councils, it would enable them to implement the new minimum wage to council workers with little or no challenge.

Other labour union leaders who made presentations at the meeting include the state Chairman Nigeria Union of Teachers, Comrade Kala-ama John and the Chairman of Medical and Health Workers Union of Nigeria, Comrade Barnabas Simon.