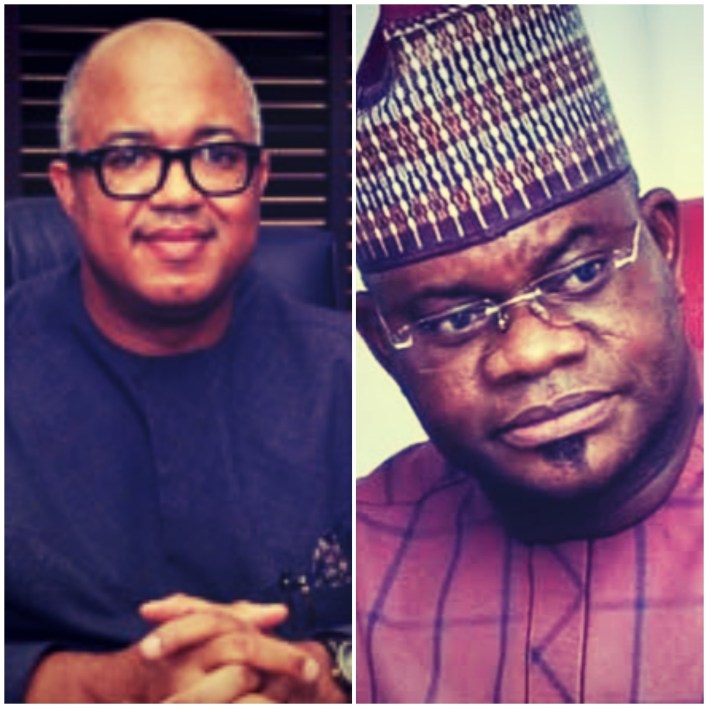 NCDC and Business of Disease Control: Governor Yahaya Bello in Eye of the Storm

As the figure of infected persons with Covid-19 increases, ALEX ENEMANNA examines the issues and politics in Kogi State.

When President Muhammadu Buhari in 2018 signed into law the Bill for an Act to establish Nigeria Centre for Disease Control (NCDC) the aim was to among other things for the body to be at the vanguard of developing a mechanism for the detection and response to outbreak of infectious disease and public health emergencies, coordinate and supervise surveillance systems for the collection, analysis as well as systematic interpretation of data on diseases of public health importance and providing the technical support to states in response to outbreak of (minor) disease and lead the response to large disease outbreaks in the country.

The outbreak of coronavirus or COVID-19, first recorded in Wuhan, China late last year from a suspected wildlife which today has spread like a wildfire across the global community, including our dear country Nigeria has exposed the institutional shenanigans and administrative malfeasances that have become synonymous with some of our public and private sectors. Suffice to say that since the COVID-19 index case was recorded in February this year from an Italian man who flew into Lagos, the country has on daily basis continued to have a bountiful harvest of positive cases. As a leader sufficiently abreast with his avowed covenant of promoting the security and welfare of his people, President Muhammadu Buhari took some rewarding actions towards the curtailment of the disease that has now become a pandemic. He immediately announced a restriction of movement, ban on interstate travels, social gathering in FCT, Lagos, Ogun and later Kano, a move replicated in nearly all states of the federation by their chief executives.

While these were going on, there appeared to be a fixated desperation on the side of NCDC to ensure equitable distribution of the disease among the states as against rolling its sleeve and swing into action, come up with a robust roadmap to flatten the curve of COVID-19 threatening our lives and livelihood, changing the way we live and work, holding our economy by the jugular and indeed throwing millions of our people to the already saturated labour market. Intuitively, compatriots are confronted with legion of questions as to who is controlling who between the disease and NCDC. The Centre from all indications seems to have lost its grip. It appears helpless and has finally resigned to fate of autopilot by the ravaging disease.

It is important to underline here that this intervention is not in any way undermining the gains NCDC has made in dealing frontally the novel coronavirus, just like the centre must bear in mind that it is not a crime against God for a state to be free of the virus as exemplified in Kogi and Cross River states. Interestingly, attempts for force down imaginary positive cases down the throat of the good people of Kogi in highly suspicious manners raises concern. In early May, officials of NCDC invaded Kogi under the veneer of offering technical assistance to help maintain her virus-free status. Surprisingly, the disease controllers became jittery of their own shadows with their adamant refusal to submit for test and isolation for a minimum of 14 days in line with their own protocol, haven come from Abuja one of the hotbeds of the disease before they could be allowed to do their job. Needless to reiterate that without any iota of haggle, Chinese doctors submitted themselves for test and isolation the moment they arrived Nigeria for a technical assistance.

Is there anything the centre is not telling Nigerians? It takes a superior level of statesmanship and gentlemanliness as exhibited by His Excellency, Governor Yahaya Bello not to order for the arrest and prosecution of NCDC team as their action perfectly qualifies as an external aggression. It smacks of surreptitious, howbeit calculated attempt to undermine the efforts of the governor at protecting his people from internal and external threats in line with his constitutional mandate as the chief security officer of Kogi.

Yet undeterred in achieving a questionably ulterior motive, the centre few days ago whisked a septuagenarian, said to have been attacked by a hive of bee in addition an underlying ailments from Kabba where he was on admission to Federal Medical Centre (FMC) Lokoja on their sole discretion. Without recourse to the state authority, NCDC again hurriedly ferried him to Abuja, rebuffing the government’s request to test and manage their citizen at a specialist hospital in the state.

More laughable however is the way and manner authorities at FMC in Lokoja accused the ailing man of running away from its facility, just for the truth to emerge that he was indeed taken to Abuja with a vehicle belonging to FMC. Expectedly, few hours later, he was slammed with the paintbrush of a COVID-19 patient. For the second time, a Kogi state delegation was denied access to him in Abuja.
While the world watches with keen interest the mission and mode of operation of NCDC, suffice to say that the state has remained COVID-19 free only by the gracious providence of the Supreme who alone is the ultimate protector, who alone operates in a way humans cannot comprehend and who alone gives the crown of honour and mercy to whom He so pleases. One of the missions of the NCDC is not to allocate figures of virus-positive cases both real and imaginary nor is it to ensure each state has its fair share of disease outbreak in a way that can only be discussed on the table of Federal Character. Emergency public health outbreaks are not ministerial appointments or heads of boards and agencies that must be equitably distributed among the regions to calm frayed nerves. They are also not ambassadorial appointments or engagement into NNPC board membership. Nigerians must begin to demand for explanation to salient questions from the NCDC. The case of citizen Susan Idoko who was only few days ago released after over 50 agonising days in the custody of NCDC without any symptom nor treatment even when she was dubbed COVID-19 positive casts aspersions on whatever is left of the integrity of the body. The Dokpesis have told all who care to listen that they were treated with only malaria drugs. Again, the secrecy surrounding the management techniques of the disease calls for concern. Our people are entitled to know what they are administered with.

The sterling leadership quality His Excellency, Alhaji Yahaya Bello has again come under test as the last man standing along with his Cross River counterpart. While he may not have prevailed by strength lest any man boasts, his experience from the effective management of Lassa fever stands him out in dealing with epidemics such as COVID-19. As a state chief executive who came prepared, governor Bello has recruited no fewer than 239 health surveillance officers planted in all wards in the state. Apart from this, the village heads, community leaders, local government chairmen and royal fathers are at alert to ensure the disease is not imported through their respective domains. The water tight measures put in place by the state government under the able leadership of Alhaji Yahaya Bello to check the importation of coronavirus has contributed in immense measure to the success recorded so far. The test kits acquired by the state are among the bests across the globe. The establishment of three modern isolation centres advertises the readiness of Kogi government in case of any eventuality.
It is not in doubt that His Excellency, Alhaji Yahaya Bello has left an indelible milestone in enhancing the lives of his people in virtually all sectors of the economy – health, infrastructure, agriculture, security, education et al. Little wonder he overwhelmingly secured his second term in office after mustering a humongous 406,222 votes to defeat his closest rival, the PDP candidate, Musa Wada who garnered a paltry 189,704 votes. That the election petition tribunal sitting in Abuja recently upheld the November 16, 2019 election of Governor Yahaya Bello didn’t come as a surprise to any discerning mind. Since his election, he has never ceased to offer olive branch to all political camps to move the state forward.

His second term in office with the slogan ‘Let’s Do More’ has in its first 100 days recorded unprecedented progress. The Okene born politician is breaking new grounds in development of the state. One of the quick wins within 100 days is the commencement of the World Bank assisted Nigeria Erosion and Watershed Management Project (NEWMAP) for the stabilisation, reclamation and channeling of Adumu and Agassa erosion sites in Olamaboro and Okene local government areas. The contractors are working at sites in Ogugu and Agasa simultaneously.

The fresh focus of the administration will also through ‘Operation Light Up Kogi East’ provide electricity for no fewer than 200 communities in the area in furtherance of the governor’s rural electrification project. After decades of perpetual blackout, many communities will sing a new song as N1.5billion has been set aside for ‘Operation Light Up Kogi East’. Just recently, the state secured a $10 million loan for infrastructural development projects across the state and contractors will in no distant time be mobilised to sites. Kogi is also among the 24 states accessing N43.416 billion World Bank performance-based grants which was based on the results achieved in 2018.

While hoping to tell the story of Governor Yahaya Bello’s record-breaking performance at a later date, it is empirical to state that no institution is bigger than the people. NCDC must go back to the drawing board, have a review of its mode of operation and tailor it towards serving the people with integrity and honesty. Until then, it calls for celebration that as at this date, Kogi is COVID-19 free.

Enemanna is an Abuja-based journalist