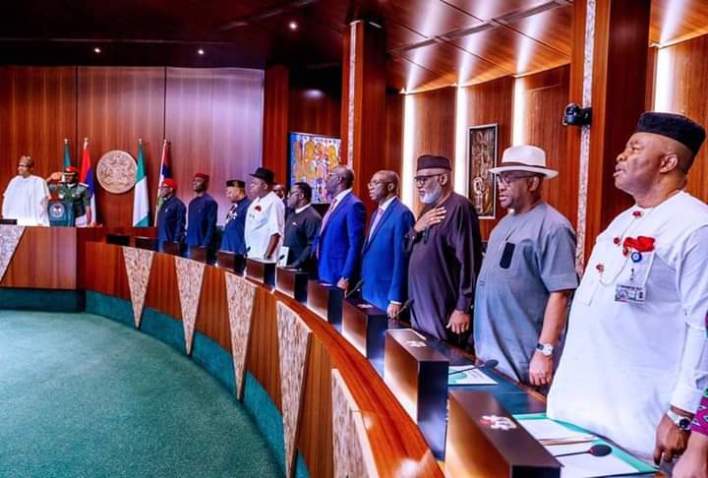 President Muhammadu Buhari Tuesday in Abuja said law enforcement agencies have recovered over N3.7billion as well as various assets worth billions of Naira from contractors and former directors of the Niger Delta Development Commission (NDDC).

The President disclosed this at the inauguration of NDDC Advisory Committee, comprising the 9 Governors of the Niger Delta Region and the Ministers of Niger Delta Affairs and Environment.

Specifically, President Buhari said: ‘‘To date, the EFCC and other agencies of Government have recovered over N3.7billion in cash as well as various assets worth billions of Naira from some contractors and former Directors of the Commission.

‘‘Furthermore, I am told that Government agencies have placed liens on over N6 billion of assets which are being investigated.’’

The President told the committee that these abuses of the past clearly show the need for strict and diligent oversight, going forward.

He, therefore, charged them to discharge the new assignment diligently and effectively, working closely with the relevant ministries, adding that he looked forward to seeing positive changes in the affairs of the Commission as well as on the ground in the Niger Delta region.

President Buhari recalled that in 2016, his administration launched the “New Vision for the Niger Delta (NEVIND)”, aimed at bringing sustainable peace, security, infrastructure and human capital development to the region.

He said the medium to achieve this noble objective was through the Ministry of Niger Delta Affairs, NDDC and the Presidential Amnesty Programme (PAP).

The President, however, expressed regret that in the past these institutions were unable to deliver their mandates due to mismanagement.

‘‘As a result, the people of the Niger Delta were left with abandoned infrastructural projects and substandard social programmes which were designed to improve their living conditions.

‘‘It is to reverse this trend that I approved, in February 2020, the constitution of a 10-Man Presidential Monitoring Committee (PMC) as provided for in Section 21 of the NDDC Establishment Act.’’

He noted that the PMC, which will be chaired by the Minister of Niger Delta Affairs and its members drawn from various MDAs, will focus on monitoring the operations and activities of the commission, and will be reporting to him.

In the same vein, the President said the inauguration of the NDDC Advisory Committee is in line with the provisions of Section 11 (I) of the NDDC Establishment Act, explaining that the Committee is charged with the responsibility of advising the Board and monitoring its activities.

Justifying the decision to inaugurate the Committee ahead of the reconstitution of the NDDC Board, President Buhari said:

‘‘This is to enable us develop insights into the affairs of the Commission which will properly guide the Board when reconstituted once the Forensic Audit exercise on the Commission is concluded.

‘‘You may recall that the Federal Executive Council, on 5th of February, 2020 approved the appointment of the Lead Forensic Auditors. I am told they are concluding their pre-engagement activities and should be ready to commence work soon’’.

Speaking on behalf of the members of the Advisory Committee, Governor Ifeanyi Okowa of Delta State thanked the President for inaugurating the Committee and granting the request of the governors, from the region, for a forensic audit of the NDDC.

The Governor expressed the hope that the result from the forensic audit would help streamline activities of the NDDC with a view to putting it on course to deliver on its mandate to the people.

Underscoring the roles of the Advisory Committee, the Delta State Governor noted that for sustainable development of the region, the NDDC must perform its duties in close collaboration with the States to avoid duplication of projects.

‘‘We do not want to criticise what has happened in the NDDC for quite some time, but the fact is that the cooperation between the states and the NDDC has not been strengthened overtime and we have various cases of duplication of projects that are not properly planned.

‘‘But I believe that with the inauguration of this body we will be able to sit down, meet together, work in collaboration and supportively to bring greater developments to our people,’’ he said.