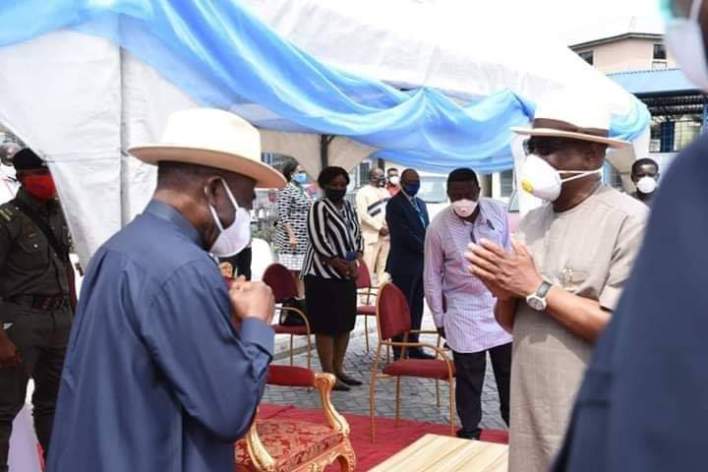 Rivers State Governor, Nyesom Ezenwo Wike has stated that this is not a time for endless criticism, but a time for all privileged Rivers people to make their contributions to ensure that coronavirus is defeated in the state.

“This should be a collective effort to curtail the spread of this pandemic.”

Governor Wike called on all wealthy Rivers indigenes to use their resources to invest in supporting the state. He said that ignoring the less privileged at this will not be helpful.

Governor Wike reiterated that it is unfortunate that Rivers State does not have a Federal Government testing centre, despite its economic position in the country.

He thanked the Former Rivers State Governor for always working to promote the interest of the State.

“I thank you so much. With what what you have done, those Rivers people who have been sleeping in Lagos and Abuja will be encouraged to work for the State. ”

On the fight against coronavirus, Dr Peter Odili said that the entire world is at war, saying that the virus has declared war on humanity, while there are no safe havens.

He said: “It is a new thing that calls for response. And the Governor’s response has been proper. The closure of the borders was a step in the right direction. ”

He announced the donation of PCR Test Machine and three thousand test kits and reagents to the Rivers State Government by Pamo Clinics and Hospitals to enhance the fight against coronavirus.

He prayed God to protect Governor Wike as he works to protect Rivers people.

In his remarks, Rivers State Health Commissioner, Professor Chike Princewill said that with the PCR Machines and the necessary reagents, the State Government can complete coronavirus tests in the state.