Meet the housemates for the season 3 of Big Brother Mzansi, BBMzansi 2022 as the season kicks off on January 23, 2022.  The BBMzansi is the South African reality show.

We run the profile of the 18 housemates in BBMzansi 2022, as you we meet them, you will understand their ideology and background and how they intend to play their game.

Thando Mati, 30 from Soweto, is a family orientated model. She describes herself as fun, loving, a free spirit and a risk taker. She’s a foodie who would love to open a restaurant that only serves everything that she likes. That’s because food embodies what she loves most, which is community and togetherness.

Luthando Mthembu, 31 from Johannesburg via Durban. An aspiring musician & former research analyst. He is currently pursuing his dream of becoming a musician.

Rethabile Potsane, 29 from Johannesburg via Durban and Welkom, a businesswoman. She describes herself as bold ambitious and passionate – she is “loud and proud” and believe”s she can transform people’s moods and lift their spirits when she is around.

Gershwin Mthombeni, 28 from Pretoria, a fashion designer & entrepreneur. Gershwin describes himself as a “typical guy”, with varied interests and talents. “I’m very artistic,” he says.

Libo Njomba, 32 from Johannesburg via King William’s Town, a salesperson, personal trainer, IT graduate. Libo considers himself to be a “very fun” person with friends who would describe him as a bit of a goofball.

Michelle Mvundla, 27 from Daveyton, a Sangoma. She has soft, laidback energy, and she describes herself as outgoing and kind but with “zero tolerance for nonsense”.

Naledi Mogadime, 24 from Pretoria, a model and actor. She is a well-travelled model who describes herself as a “fine gyal, not a sad gyal”. She is a firecracker, but she is also calm and zen.

Norman Nhlapo, 24 from Johannesburg via Pretoria, a daycare worker. Norman says he is a calm and warm person with an adaptable personality because he’s moved around a lot.

Keamogetswe Motlhale, 24 from mahikeng, North West, a marketing communications graduate. Fun and free-spirited, the easy-going Keamogetswe loves to understand people and says she isn’t judgmental when it comes to people’s characters.

Ukho Samela aka Sis Tamara, 25 from Johannesburg via Queenstown, a film student. Multifaceted and with various interests, Ukho has studied psychology and is a final year film and television student. Going by the pronouns he / him / she / her / they / them, Ukho is known as Sis Tamara and describes themselves as “a gender non-conforming experience”.

Meet Housemates, Gugu Bonga in BBMzansi 2022 aka Terry Treasure, 26 from Johannesburg a makeup artist & adult content creator. A self-described “class clown”, Gugu says she has a very big personality, and stands for acceptance and non-judgement. Honest almost to her own detriment, she doesn’t like fake people.

Thato Mokoena, 28, from Johannesburg, an accountant, content creator & actor. He is a TikToker who loves nothing more than dabbling in different activities to leave her adventurous personality unboxed.

Themba Mabaso, 30 from Johannesburg, a Tattoo artist. A looker with a personality that makes him a magnet for curiosity, Themba will be relying on more than just his dashing appearance to woo the hearts of Big Brother Mzansi S3 viewers.

Tulani Madala, 28 from Johannesburg and East London, a voiceover artist, actor, broadcaster A smooth-talking straight shooter, Tulani possesses the rare gift of being able to be bluntly honest in a mellow tone.

BBMzansi 2022 Meet Housemates, Thobeka Mtshali aka Venus, 25 from Durban, a aspiring musician, bartender. She is multi-dimensional personality will keep you on your toes. The Durbanite is the ultimate creative – expressing layers to her craft through music, making beats and fiddling with the keys on the piano.

Yolanda Glover, 30 from Durban a Performing arts teacher, & psychology student. She is outgoing, fun and bubbly. She’s a bit of a socialite with an infectious energy, which makes her fun to be around.

Adindu Asuzu aka Zino, 21 from Johannesburg, a Digital marketing student. The youngest Housemate of the season, Adindu is a self-confessed “mummy’s boy”, and it was following her advice that got him to enter the competition in the first place. 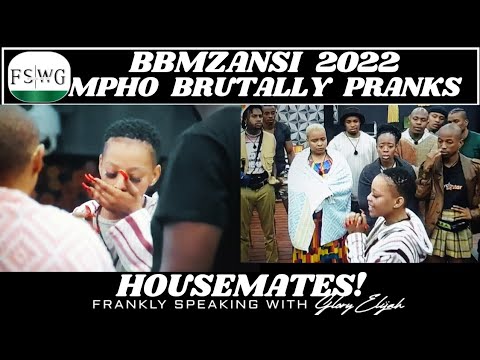