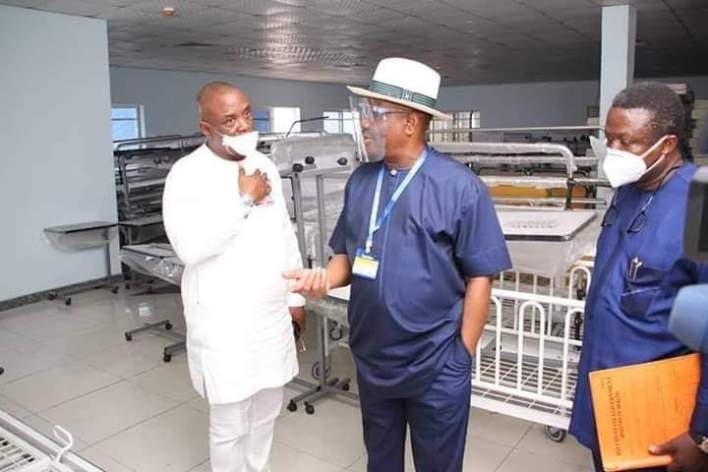 Rivers State Governor Nyesom Ezenwo Wike has reassured the people of the State that COVID-19 pandemic will not stop the completion of all on-going projects.

He gave the assurance while on inspection tour of a number of projects in Port Harcourt and Obio/Akpor Local Government Areas of the state.

The governor noted with satisfaction the extent of work done already at the Mother and Child Hospital that has reached the stage of installation of medical equipment.

He said furnishing and installation of medical equipment in the hospital have been delayed because the ban on international flights has denied partners from Germany from coming into the State.

“But you can see that everything is set. We believe that in the next few weeks when the federal government lifts the ban on international flight, they will come in and start fixing the furniture and other medical equipment.

“The equipment will be of world standard and we are happy with what we are doing for the people. That is what I have always said that our people deserve the best they can get. I’m happy with the level of work we have seen today, ” he said.

On the Rumuogba flyover bridge, Governor Wike said skeptics thought it was a mere political statement when his administration promised to construct three flyover bridges simultaneously.

He said the progress of work at the sites of the three flyover bridges gives the hope that they would be completed within the stipulated time which is early 2021.

“All of them are ongoing, look at the quality of work done. Look at the people, how they are highly elated. That is what they want and we give them things that will improve their life .

“Yes we are talking about COVID-19, but while we are fighting that, we must try to provide basic infrastructure for the people. At the end of the day, the pandemic will not be here forever but the people can continue to have the infrastructure that will improve their economic life,” he stated.

The governor also announced that another tranche of payment will be made to Julius Berger Construction company to bring what they have received so far to about 90 percent while 100 percent payment has been made for the Mother and Child Hospital project.

Governor Wike said even if COVID-19 pandemic has influenced the review the state’s 2020 budget, it would not be used as excuse to stall the completion of all ongoing projects.
Sent from my Samsung Galaxy smartphone.