The bible says, faith cometh by hearing the word of God.  As you read today’s FROM FAITH TO FAITH DAILY DEVOTIONAL written by Kenneth Copeland will help increase your faith in God.

Read today’s From Faith to Faith daily devotional 2 November 2022 titled He Opened the Way written by Kenneth and Gloria Copeland for your spiritual daily bread for growth and development today.

The deity of the Lord Jesus Christ is something that can never be brought into question by any born-again believer. Our very salvation rests on the fact that Jesus Christ is divine, the second person of the Godhead, God—the Son.

The beloved disciple and apostle, John, forever puts to rest any doubt about that in John 1:1,14. Anyone who doubts what those verses say could not possibly have been born of the kingdom of God. For the deity of Jesus forms the very foundation of our faith in Him.

Yet, if you’ll search the Gospels, you’ll see that Jesus didn’t go around proclaiming Himself as God during His 33 years on earth. He acknowledged that He was the Son of God, the Messiah. He referred to God as His Father (which enraged the Pharisees), but He never made the assertion that He was the Most High God. In fact, He told His disciples that the Father God was greater and mightier than He (John 14:28).

The reason is simple. He hadn’t come to earth just as God. He’d come also as man. The Word says He set aside His divine power and took the form of a human being—with all its limitations. Since God was His Father, He was not born with the sin nature that had been passed along to the sons of Adam. But by being born of a woman, in all other respects He became a man and called Himself the Son of Man or, literally, the Son of Adam.

How, then, did He do all those mighty works? The same way He expects us to do them today—by the Anointing and the power of the Holy Spirit (Acts 10:38). He said, “It’s the Father within Me who does the work.”

What does that mean to you? It means that Jesus meant exactly what He declared when He said that you, as a believer, would be able to do the works that He did (John 14:12)!

It means that you, as a reborn child of God, filled with the same Holy Spirit as Jesus was, have the opportunity to live as He lived when He was on earth.

In fact, that is exactly what He intends. He went before you, as a man, and opened the way. Don’t just admire Him for it. Follow Him in it today!

Thank you for reading today’s From Faith to Faith daily devotional 2 November 2022 titled He Opened the Way.  Share with a friend, God loves and cares for us! 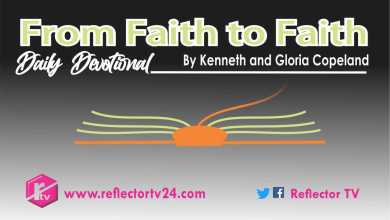 From Faith to Faith Daily Devotional 10 December 2022 Titled Love: The Secret of Success