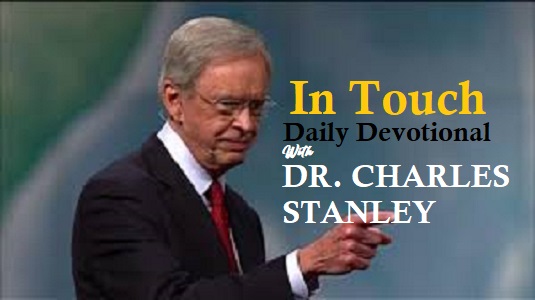 PREVIOUSLY ON IN TOUCH DEVOTIONAL FOR TODAY

TOPIC: THE DANGER OF BITTERNESS

Many are hurt when we give in to negative emotions.

Have you ever seen a person overtaken by bitterness? It is very sad to watch someone consumed by that type of darkness. None of us intend to end up in that condition, but unless we guard against it, malice can take hold of us.

That’s what happened to King Saul. He began his reign with great blessings—God’s anointing, the prophet Samuel’s guidance, and the applause of the people. Yet he died a bitter man because he allowed jealousy, anger, and fear to dominate his life.

Instead of rejoicing that God had raised up someone to slay the giant Goliath, Saul became jealous and resented the fact that David received more praise than he did. Soon the king became suspicious and fearful because he knew he’d lost the Lord’s favor, which was now being shown to David instead. In desperation, Saul plotted to kill him.

Although the details of your life differ from Saul’s, the steps to bitterness and ruin are the same. Has jealousy poisoned your mind? Have you allowed unresolved anger to fester? Whom do you avoid because of ill will? If any of these things apply to you, confess them to God. Then ask Him to reprogram your mind and emotions so the bitterness can be removed.

Thank you for reading today’s In Touch Devotional Today 18 August 2022 titled The Danger of Bitterness written by Dr Charles Stanley .  Share with a friend, God loves and cares for us!