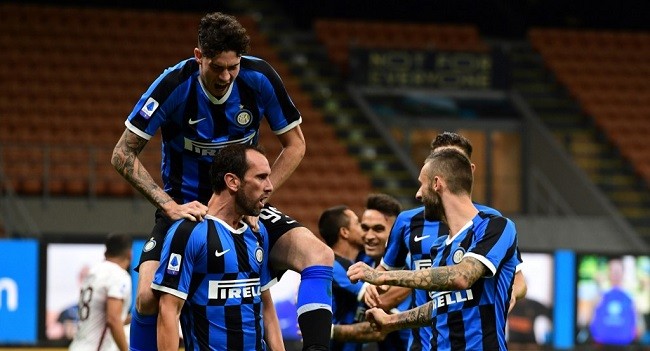 Inter Milan put one foot in next season’s Champions League on Monday after coming from behind to beat relegation-threatened Torino 3-1 and move up to second place in Serie A.

Antonio Conte’s Inter moved above Atalanta and Lazio to go eight points behind league leaders Juventus thanks to two goals early in the second half from Ashley Young and Diego Godin and another from Lautaro Martinez just after the hour mark.

The Milanese club are level on 68 points with off-form Lazio, who slumped to a 2-1 defeat at Sassuolo on Saturday, and one ahead of flamboyant Atalanta in fourth.

However, with a first league title since 2010 unlikely, the most important statistic for Inter is the 14-point gap between them and fifth-placed Roma with six matches left to play.

“It’s important to win matches like this any way you can … I think we deserved to win,” said Godin to Sky Sport Italy.

“We’re second now and we want to continue winning … let’s see where we can finish, but it’s difficult to get closer to Juventus.”

Torino meanwhile still have to look over their shoulders following their fourth defeat since the league restarted last month.

Moreno Longo’s side are 16th, five points above the relegation zone with the visit of fellow strugglers Genoa coming up on Thursday.

Inter, who were missing star striker Romelu Lukaku and started without regular first-teamers Milan Skriniar, Christian Eriksen and Antonio Candreva, didn’t have it all their own way at the San Siro.

They found themselves behind with 16 minutes gone when under no pressure Samir Handanovic dropped a corner straight to the feet of Italy forward Andrea Belotti, who couldn’t believe his luck as he tapped home the opener from inches out.

The hosts, who have been rocked by rumours of dressing room unrest, struggled to react and Christian Ansaldi could easily have doubled Torino’s lead when Handanovic just managed to hold onto his powerful shot five minutes before the break.

All their good work vanished in the space of two minutes shortly after the restart however, with Ashley Young levelling the scores in the 49th minute when he lashed home Martinez’s knockdown.

Young was involved when Inter went ahead just two minutes later, the Englishman finding former Manchester United teammate Alexis Sanchez with a chipped pass and the Chilean heading over for Godin, who nodded home off the crossbar from close range.

Torino had a chance to level when Simone Verdi’s header was well saved by Handanovic in the 54th minute, but Martinez — whose talks with Barcelona have stopped according to Barca president Josep Maria Bartomeu — wrapped things up soon after.

The Argentine hadn’t scored in five matches heading into Monday’s contest and after collecting Sanchez’s pass his shot was helped over the line by a big deflection. -AFP