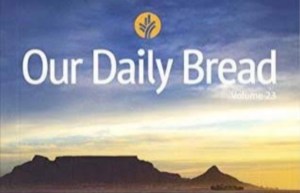 DAILY BREAD DEVOTION OF THE DAY 27TH MAY 2022 – Read today’s Our Daily Bread 27 May 2022 ODB devotional titled The Forecaster’s Mistake for our spiritual daily bread for growth and development today.

Let the one who has my word speak it faithfully. – Jeremiah 23:28

At noon on September 21, 1938, a young meteorologist warned the U.S. Weather Bureau of two fronts forcing a hurricane northward toward New England. But the chief of forecasting scoffed at Charles Pierce’s prediction. Surely a tropical storm wouldn’t strike so far north.

Two hours later, the 1938 New England Hurricane made landfall on Long Island. By 4:00 p.m. it had reached New England, tossing ships onto land as homes crumbled into the sea. More than six hundred people died. Had the victims received Pierce’s warning—based on solid data and his detailed maps—they likely would have survived.

The concept of knowing whose word to heed has precedent in Scripture. In Jeremiah’s day, God warned His people against false prophets. “Do not listen [to them],” He said. “They fill you with false hopes. They speak visions from their own minds, not from the mouth of the Lord” (Jeremiah 23:16). God said of them, “If they had stood in my council, they would have proclaimed my words to my people” (v. 22).

“False prophets” are still with us. “Experts” dispense advice while ignoring God altogether or twisting His words to suit their purposes. But through His Word and Spirit, God has given us what we need to begin to discern the false from the true. As we gauge everything by the truth of His Word, our own words and lives will increasingly reflect that truth to others. By:  Tim Gustafson

Our Daily Bread 27 May 2022 ODB Devotional || REFLECT: What’s the standard you use when you decide whether something is true? What in your attitude needs to change toward those who disagree with you?

Loving God, so many claim to speak for You these days. Help me learn what You really have to say. Make me sensitive to Your Spirit, not the spirit of this world.

Thank you for reading today’s Our Daily Bread 27 May 2022 ODB Devotional || The Forecaster’s Mistake.  Share with a friend, God loves and cares for us!