The life and times of Mrs. Pounere Rosemary Pereotubo depicts the essence of woman as a helpmate to man, in line with God’s purpose. Pounere exemplified real womanhood, and was a good mother throughout her sojourn on earth.

She was enterprising, loving, caring and committed to the well-being of her family, community and in God’s vineyard.

Born in 1938, to Elder Ekeinga Boubai of Isampou in Ekeremor Local Government Area of Bayelsa State, her birth signified the roles she would play in society. Her mother was Madam Diedie Akpe of Tobufiekumor-Ware of Tuomo community in Burutu Local Government Area, Delta State.

The only female out of three children, Pounere suffered societal disdain for girl-child education, as it was in the past.

However, her parents cherished her, being the only daughter of the union, and second in age.

In 1943, her mother, Diedie relocated to Tuomo with all the three children. At that time, little Pounere was five years old. She spent most part of her early life in Tuomo, her maternal town.

Though she missed early education, Pounere was intelligent, wise and industrious, traits that saw her through in all her endeavours in life.

In 1956 when she was 18, the tall, pretty, lively and intelligent Pounere, married a sailor, Mr. Martins Odi. They gave birth to three children: Mr. Terryl Odi; Mr. Chris Odi and Professor Christine Odi.

Mrs. Pounere’s relocation from Tuomo to Lagos, where her husband, Mr. Martins lived and worked as a seafarer, exposed her to the hustle and bustle of that city.

Thus, despite the well-paying job of her husband, she would not just be a home-maker. Instead, the young, energetic Pounere engaged in trading to support the family. Her mother, Madam Diedie had given her the best of training to face life’s challenges. Hence, she found it easy to undertake trading activities.

She was later re-married to a customary court president, Prince Kerema Pereotubo from Torugbene community in Burutu Local Government Area of Delta State. The union begat Barrister Oweilaemi Pereotubo and three other children.

Back home from Lagos, the hard-working Pounere enlarged her trading business. She purchased wares such as wrappers and kitchen utensils from Onitsha Main Market and paddled by canoe to various community markets in Burutu and Ekeremor local government areas to sell her wares.

The workaholic woman continued her trading business until age took its toll on her and she stopped travelling to Onitsha for business. Not willing to be idle, she opened a provision store in Torugbene.

Undeterred by old age, Pounere added food cooking and selling business, to further support family up-keep. Her delicious food was the delight of primary school pupils, secondary school students as well as community dwellers who were her main customers.

She also engaged in fishing and farming, though at subsistence level.

Empathic and kindhearted, not only to her family and relatives, Pounere was charitable to whoever came her way. Her home was the port of call for both indigenes and visitors who received the best of hospitality.

As a socialite, leader and unifier, she was an ace mobilizer of women for communal and church activities.

Her gift of entertainment made her a renowned cultural dancer in the Ogbuku Women Group, where members wore white regalia, with scarf tied round their chests, to entertain during funeral ceremonies of important as well as aged persons in the community.

In Christian life, Mrs. Pounere was committed to many activities, including coordination of the women congregation in Salvation and Deliverance Zion Ministry Inc., where she was ordained as Mother of the Church.

One of her most worrisome moments in life, was the loss of her husband, Prince Kerema Pereotubo, who died at 71 in 2003, after they had lived together for 36 years.

Yet, she took solace in God, and continued to brace up for the tapestries of life, until death took her on April 8, 2022. Her passage was despite medical and spiritual efforts to save her from a protracted illness.

Mrs. Pounere Rosemary Pereotubo was 84 years old when she passed on to the world beyond. Her remarkable legacies include the educational, skills and business support she gave to her children and others, who are also rendering services to society.

For instance, her first son, Mr. Terryl Odi is a professional banker, and former manager of the United Bank of Africa (UBA).

Her second child, Mr. Chris Odi, a veteran English teacher, public information manager and sports journalist, served the old Rivers State and later Bayelsa State, where he retired as Director of Information in the Bayelsa State Ministry of Information, Orientation and Strategy.

Barrister Oweilaemi Pereotubo, served as president of the Ijaw Youths Council (IYC), World Wide. Oweilaeme has committed most part of his legal career to fighting for the cause of Ijaws and Niger Deltans in Nigeria’s skewed federalism.

Indeed, Mrs. Pounere Rosemary Pereotubo lived a fulfilled life on earth, thus given a befitting burial by her family, relatives and sympathisers from all walks of life, as she journeys to eternity.

Her funeral rites started Friday, November 18, 2022 with a Service of songs in Warri, where she lived until her death. On Wednesday November 23, a Christian wake was held at Torugbene, her late husband’s home town. A funeral service in her honour, and interment took place on Thursday, November 24, 2022 at Tuomo, amid other activities in subsequent days.

Fare thee well, woman of substance, and rest peacefully in the bosom of the Lord!

*Enideneze, a colleague to Veteran Chris Odi, wrote in this spotlight from Yenagoa, to honour Madam Pounere. 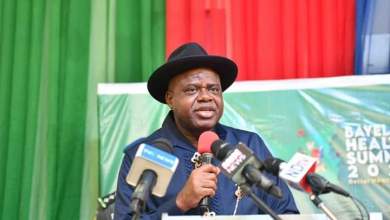 Spreading Even Distribution of Government Projects or Amenities in Bayelsa