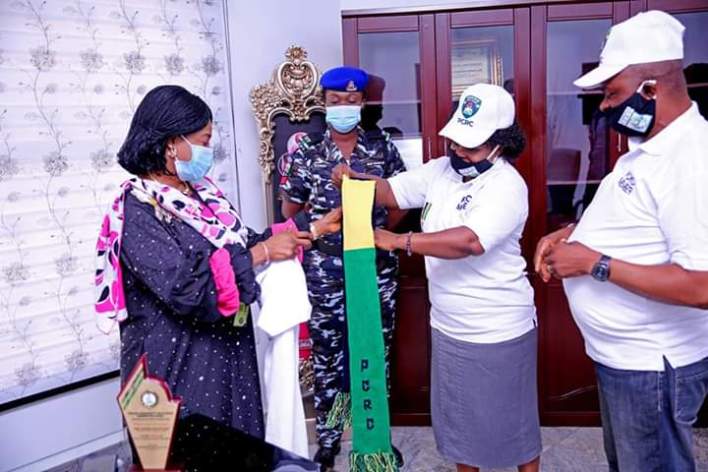 The Police Community Public Relations (PCRC), has named the first Lady of Bayelsa State, Mrs Gloria Diri as its Patron.

She was decorated on Wednesday during the visit of the members of the Association to her office in Government House, Yenagoa.

Mrs Gloria commended members of the PCRC for their selfless service to mankind and the entire state as a whole.

“It’s a rare privilege to serve as the patron of this great Association;

I want to commend you for all the good works you have been doing to curb the criminal element and insecurity in the state.

We are going to work together to ensure we conquer insecurity challenges in the community and in the state.”

“I have heard all your challenges and I will see how we can solve them with the help of the state government. Though it will be gradual, I believe God that we will get it right at the end of the day.”

Speaking earlier, the chairman of the PCRC: Dr Ernest Samuel JP; commended her Excellency for accepting to be patron of the organization.

He reiterates that the function of the association is to aid the police in combating crime in the society.

Speaking through the Police Public Relations Officer, Asinim Butswat; the Commissioner of Police, Mr Nkereuwem Akpan described the police community relation committee as a successful tool used by the police force in fighting criminality in the state.

He added that the police command is delighted for the robust relationship between the government of Bayelsa state and the PCRC.

In a related development the police officers wives association (POWA), has expressed its readiness to collaborate with the office of the first Lady in its efforts to curb crime.

She assured that the association would share in the vision of a greater Bayelsa being realized by the first lady.

While responding, Mrs Gloria Diri urged the executive of POWA to empower women with information and knowledge by organizing seminars and workshops.

She added that her office will work closely with the association to actualize the goal of greater Bayelsa.