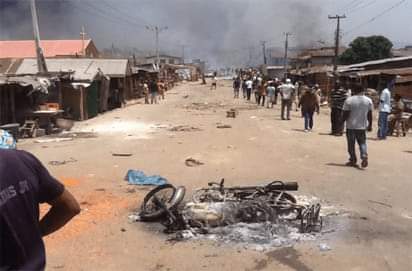 Many people were feared dead, while no fewer than 300 farmers sustained various degrees of injuries and property worth millions of naira destroyed following a clash between the people of Umumbo and their Omor neighbours in Ayamelum Local Government Area of Anambra State.

It was not clear what prompted the latest incident, although Vanguard recalls that the two communities had over the years been involved in a protracted land dispute that had claimed several lives in the past.

At press time, it was gathered that about 50 persons allegedly abducted during the bloody clash were still missing.

A large number of houses, shops and rice mills belonging to Umumbo community were also destroyed.

The speaker of Anambra State House of Assembly, Mr Uche Okafor, who represents the constituency in the state legislature, was accompanied by heavily armed military and mobile policemen to quell the bloody clash.

An unconfirmed number of people were said to have been arrested, even as those at large were being fished out by security operatives.

The two communities are among the major food-producing areas of Anambra State, where rice and other grains are produced in large quantity

The latest squabble was the high point of a protracted land dispute between the two communities, which started during the last dry season.

According to an eye witness, a section of one of the communities allegedly breached the gentleman’s agreement reached between the two traditional rulers of the two communities sometime last year, thus igniting the latest clash.

Following the clash, many people ran away from their houses for fear of being killed.

Worried by the latest incident, the Anambra State government vowed, yesterday, to deal decisively with those who masterminded the violent clash.

Commissioner for information and public enlightenment, Mr Don Adinuba, said in a statement that security operatives have been directed to bring all those involved in the clash to justice.

Adinuba said: “The Anambra State government notes with profound sadness the conflict between the people of Umumbo and their neighbours in Omor community over land ownership which has in the last two days resulted in one confirmed fatality and the destruction of valuable assets in both places.”

“Security agents drawn from the Nigeria Police Force, the Nigerian Army and the National Security and Civil Defence Corps have since been drafted to the scene to stabilize the situation and maintain law and order, just as a curfew has been imposed in the two communities from 6 pm to 6 am.

“This conflict is a negation of the strenuous effort the government and people of Anambra State have been making in the past six years to make Anambra, not only the safest and most secure state in the federation but also the most socially harmonious.

“The arrest and prosecution of those connected with the Umumbo-Omor crisis will serve as a lesson to other people who may wish to fan the embers of disunity and crisis in any other part of the state. The utterances and actions of these elements are inimical to the state government’s drive towards the rapid economic and social development of the state.”